You are here: Home / West Asia / Isis: 6 suspected Daesh supporters arrested for planning to detonate bombs in Java and Sumatra 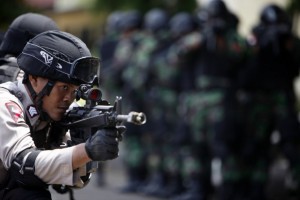 Counter-terrorism officers in Indonesia have arrested six suspected Islamic State (Isis) supporters for planning to bomb Shia communities in Java and Sumatra during the holiday season. During raids, the National Police’s counterterrorism squad, called Densus 88, found bomb-making material, jihadi manuals and a black IS (Daesh) flag in the possession of the suspects.

“Based on the outcome of initial questioning, the suspects said they were planning to bomb a series of Shiite communities in Pekalongan [in Central Java], Bandung and Pekanbaru [in Riau],” a source at the National Police headquarters told the Jakarta Globe. The raids were carried out between 18 and 19 December.

“This terrorist network was preparing for bombing attacks in various locations in Indonesia. They are a mix of [Islamic State] Isis supporters,” National Police chief, General Badrodin Haiti, said adding: “Some are Isis members and others are sympathisers.”

He said the raids were carried out after intelligence was received from the Federal Bureau of Investigations (FBI) and the Australian Federal Police. “There are still others,” Badrodin warned and called on the public to remain vigilant.

“They were going to make a cellphone-activated bomb and would have carried out [an attack] if we hadn’t stopped them,” acting Densus chief Sr Comr Edy Hartono said.

Asep Urip, 31, a teacher at an Islamic boarding school in Central Java, and his 35-year-old pupil Zaenal were arrested from Tasikmalaya, West Java. A woman identified only by the initials TA was also arrested along with the teacher-student duo. The suspect, Abu Karim, also known as Abu Jundi, was arrested from Sukoharjo district, Central Java, while Riswandi and Yudinov Syahputra were arrested from Cilacap district.

In August, the police caught three people with links to IS who were planning to launch bomb attacks during Independence Day celebrations. The country has already increased security at airports after threats were issued in Jakarta. For Christmas and New Year celebrations, around 150,000 security personnel would be deployed all over the country to provide safety to the public.