You are here: Home / Senza categoria / “ISIS 3.0”: how Silicon Valley gave rise to the next generation of Islamic terror

The digital battlefield is the least understood component of our ever-changing, 16-year war on terror—and, perhaps, the most dangerous, like reported by vanityfair.com 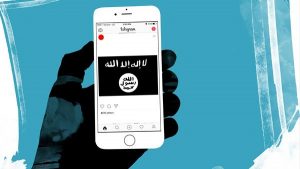 In a video that has now been deleted from YouTube, a camera pans across a desert skyline before alighting upon a young man in the familiar regalia of the modern jihadist: fatigue pants and army boots, an ammo belt across his chest and an AK-47 at his side. “March forth with your weapons and defend the fronts in Syria and Iraq,” he says, his timbre and disposition suggesting some amount of media training. “With only a few of our soldiers in we are having an outsized impact,” he adds, looking directly into the camera. His extremist group’s logo flashes across the screen: “What Are You Waiting For?”

It’s a call that many angry young men have answered in recent years by making the journey to Syria to take up arms against all sorts of enemies: Bashar al-Assad, the United States, the Russians. It is also one that has become more technologically sophisticated. The clip of the young mujahideen, which was uploaded in early November, wasn’t a traditional recruitment video, but an extremist version of a Kickstarter campaign, with the goal of signing up new fighters over the anonymous Telegram app. The group behind it wasn’t al-Qaeda or ISIS, but an umbrella group called the Levant Liberation Committee, known in Arabic as Tahrir Al-Sham, that was created as the result of a merger between the Qaeda-affiliated al-Nusra Front and other militant groups in Syria. The group’s fighters are younger and less religious; not tied to a geographic caliphate, like ISIS; and less interested in governance. They are, in other words, more nimble—and more dangerous. Call them ISIS 3.0.

As a diplomat and scholar who has studied violent extremism , I’ve seen firsthand how the spread of Tahrir Al-Sham’s message has alarmed Western intelligence agencies, how critical Internet technology has become to terrorist groups, and how vulnerable our infrastructure is to cyber attacks. With a limited number of dedicated actors, Tahrir could take down local, regional, or even national power grids. They could disrupt cellphone, GPS, and satellite communications. In a worst case scenario, they could hack into government computers and publish all types of classified military and intelligence information, endangering Western agents and assets. Our postal and package delivery systems depend on SatLocaters that, if compromised, could bring America’s sprawling logistics network to a standstill. On their hidden Telegram channel, Tahrir militants have bragged about adapting drones to deliver explosives or biological agents, and once posted an encrypted video of their efforts.

Whether or not the group has staying power, they already know how to shape and deploy information to their advantage. Recently, after an initial crowdsourcing campaign had run for only six hours, Tahrir claimed to have recruited over a dozen young followers, including five from Germany. These were played up in subsequent postings directed at potential new recruits. This crowdsourcing approach, via Telegram’s end-to-end encryption channels, is difficult to detect, let alone censor. Their Dark Web social networks, unlike ISIS’s territorial holdings, cannot be seen by satellites or destroyed with bombs. Tahrir leaders operate on the principle, “The narrower the audience, the bigger the impact.”

This still-emerging digital battlefield is the least understood component of our ever-changing, 16-year war on terror. Like any start-up, Tahrir militants have learned from ISIS’s successes and failures on the battlefield, using multiple platforms to amplify their impact. While ISIS sent messages using a broadcast model, Tahrir has experimented with platforms like Sarahah (“Honesty” in Arabic), which allows users to send messages anonymously to one person. The app provides a honeypot approach for Tahrir, in which they can A/B test different messages to see what sticks. While governments are still trying to censor ISIS on Twitter, Tahrir is experimenting with an app that reaches more than sixteen million young people and is the top download in over twenty-five countries, including Egypt, Jordan and Lebanon. Tahrir can fail, quickly measure what resonates, and retool their pitch before the activity is detected by officials. Again, speed gives them the advantage.

The group has also learned from Moscow’s 2016 campaign to meddle in the U.S. presidential election, by making tactics like disinformation and high-traffic bots an integral part of their marketing strategy. Research suggests that Tahrir surrogates have configured AI bots which can be run on thousands or even millions of user accounts at very low cost. They operate 24/7 and respond to events almost immediately, allowing Tahrir to consistently punch far above their weight. Social media giants like YouTube and Facebook can’t keep up: By the time they take down pro-Tahrir accounts, the content has already been linked or distributed through encrypted platforms like Telegram or Riot. These bots are programmed to react to certain events and create content at machine speed, shaping the narrative almost immediately. This is critical in an information environment where the first story to circulate may be the only one that people see or recall.

ISIS broke the mold with its social media savvy. But they also fell prey to old-line, establishment thinking by emphasizing land assets that could easily be targeted and destroyed. Establishing a caliphate was their measure of success, but ironically it set them up for failure. Subsequent groups, like Tahrir, are beginning to realize that winning the physical war is much less important than winning online.

Just as Tahrir has wielded outsized power by leveraging social media, so too does the U.S. need to think smaller and faster, and to be more disruptive. We need to ditch our unwieldy bureaucracy and use the very same tools the terrorists are using: social media, slick advertising campaigns, and colorful narratives. If one percent of social media users are content creators, nine percent are content curators, and 90 percent are consumers, we need to find ways to get the consumer off the sidelines. Using the best digital tools, we can ensure that the right stories reach the right audiences.

We, too, can learn from Silicon Valley in adopting faster learning cycles. There is an evolving understanding among diplomats and policy engineers of how radicalism spreads and gains traction within different communities. By identifying how ideas go viral, and how they can be countered, we can disrupt the feedback loops that Tahrir enjoys. For example, a defector’s tale of disillusionment can shatter the image of unity and sacrifice for an alleged noble cause.

Just as all politics is local, so is radicalization—and so must be our efforts to combat it. We need skilled, digital operators who can address the treatment and recovery of those who have been infected. What works for Russian speakers, might not work so well for an Arabic audience. “Going local” means we must segment both audiences and messengers. This is critical to defeating extremists and their pro-hate agenda, as mass messaging sways no one. The need is for positive, alternative messages that reach and persuade three key groups fence sitters, immediate influencers, and long-range, cultural influencers. While Tahrir has its own Game of Thrones-like videos, as well as elaborate adventure and fantasy web games, we can do better. Last year, the Saudi TV show Selfie was the #1 rated program in the Middle East and directly took on ISIS, even making fun of their caliphate. Each market segment requires its own messaging dynamics.