You are here: Home / Europe / Isil’s propaganda machine has to be destroyed 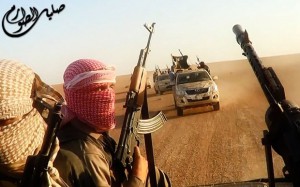 Shortly after the successful military campaign to overthrow Iraqi dictator Saddam Hussein in 2003, US General David Petraeus posed this not unreasonable question to his political masters: “So tell me how does this end?” No one quite knew, and the country was rapidly consumed by violent sectarian conflict.

I’ve seen action in Iraq and Afghanistan, and have worked closely with Gen Petraeus. And today, more than a decade later, it strikes me that his question might be asked again of our own political leadership about Islamic State (Isil). For in the absence of an effective Western response, we can expect a war without end until Isil achieves its ultimate objective of the global imposition of Islamic law, culture and religion. As things stand, however, I fear our political position is to manage this distant irritation as best we can afford while seeking to avoid a deeper military involvement.

Doing nothing is not an option. You only have to look at Isil’s intelligent use of propaganda to see what happens when your adversary is crippled by silence, dithering and inaction. Isil has created a “Caliphate” the size of Italy, which allows it to indulge in genocide, murder, sectarian violence and slavery. The West needs to realise that, if it is to be stopped, someone’s boots need to be on the ground. They could be Western boots; there should be Arab boots. In Syria they should be trained and equipped fighters with the Free Syrian Army (FSA), as well as local tribal forces. But, irrespective of their national origin, they need to be boots that are prepared to fight against this theocratic fanaticism and reclaim the land that has been taken.

It is important that we do not under-estimate the enormity of the challenge we face. In 2006, when the US-led coalition in Iraq had assembled the most advanced and technically equipped military force it could muster, it still found itself unable to defeat the determined insurgency orchestrated by al-Qaeda. It was only in 2007-08, when Gen Petraeus persuaded local tribal elders to align themselves with the coalition’s “surge” strategy, that we finally prevailed and destroyed al-Qaeda’s base in Iraq.

Eight years on, the problem might appear more multifaceted, but a similar type of approach is required if the West is to mount a charge on all fronts and without respite. The first priority must be to counter Isil’s highly effective propaganda machine. We need to find a compelling and regionally driven counter narrative of our own that disrupts Isil’s “virtual Caliphate” – far greater in scope than its land-based conquests – which persuades many susceptible young Muslims to join its ranks, whether as foot soldiers, suicide bombers, financiers or just supporters.

In the world of propaganda, it is actions that outweigh words and promises. That is why I believe Isil’s appalling treatment of those under its control will ultimately result in the caliphate breaking up with widespread dissent and resentment spreading within its ranks. This is the foundation on which a counter narrative must be built. We must exploit the growing vocal outrage in the Muslim world against Isil’s heinous exploits, as well as expose the plethora of half-truths and falsehoods promoted by Isil’s propaganda machine, such as their appalling treatment of women, who are regarded as no more than common commodities.

We must make clear that Isil’s dominance has been achieved through the intimidation of local tribes, who are too afraid to challenge the Islamists’ brutal regime, and that Isil’s military prowess is bogus, while their actual field losses are significant. By exposing Isil’s lies, we can encourage the moderate Arab voice of reason to prevail. Above all the message needs to be got across to young Muslim men and women in Britain and elsewhere that, contrary to Isil’s propaganda, it is far from being an attractive proposition for them to invest their lives and wellbeing with those running the so-called caliphate in Syria or Iraq.

We also need to target the organisation’s funding stream by freezing banking and capital assets. Then, by providing high quality training and the expert use of our own precision munitions, we need to help the Iraqi army to drive out Isil from its strongholds in the north and west of the country. Diplomatic and economic support may also be needed, but the main focus for the West should be to assist with providing accurate intelligence and far larger numbers of specialist advisers.

We also need to have a serious think about how we are going to deal with the region once Isil has been defeated.

One idea might be to have a Marshall Plan for the Arab world largely funded by them to help the area rebuild and recover. For it is vital that we give hope to the millions of refugees who have been made homeless by this brutal conflict. This could be achieved through charitable work in education, by offering improved health facilities, the development of apprentice skills, housing and other essential services. Restoring some semblance of dignity to the dispossessed will be a critical element in the region’s future stability.