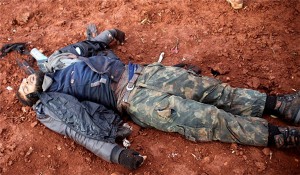 A group named the Intelligence Hawks affiliated to the Iraqi interior ministry announced in a statement on Wednesday that the Belgian commander of the ISIL was killed in al-Qa’em town in al-Anbar province.

The slain terrorist was expert in surveillance and reconnaissance missions.

Late in July, at least 13 notorious ISIL leaders, including a deputy of ISIL Leader Abu Bakr al-Baghdadi, were killed by Iraqi warplanes near the Syrian border.

The Iraqi fighter jets launched an airstrike on a gathering center of ISIL commanders in al-Qa’em town, which is located nearly 400km Northwest of Baghdad near the Syrian border, an army statement said.

The statement said that the airstrike also led to the destruction of two booby-trapped cars and a bomb-making plant.

The statement also pointed to massive explosions at the site “which means the high quantities of ammunition and explosive belts which were destroyed”.