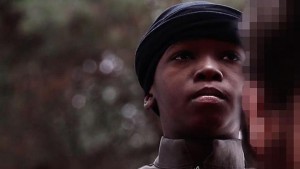 The 17-minute video, the latest in a long string of propaganda films released by ISIL on its media channel, reveals ways in which the terror group is willing to exploit child soldiers.

The clip depicts the boy, wielding a knife, dragging his prisoner through the woods.

In a rare move the boy’s face is uncovered in the clip, likely to reveal his young age.

The pair soon stop and the man kneels down in front of the boy.

“Oh America, these are the soldiers you armed and you spent money on to fight the Sharia of Allah,” the young boy says, in English.

“I wish to meet you on the hills of Dabiq.”

Although he speaks in fluent English throughout the clip, the boy’s origin is unknown.

The clip ends with the boy pushing the prisoner to the ground and using the knife to cut off his head.