You are here: Home / MidEastGulf / ISIL transfers military equipment from Palmyra to Iraq 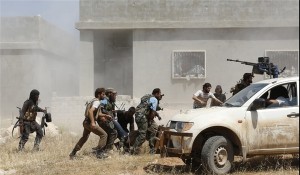 The ISIL has transferred several weapons and military equipment seized from the Syrian army in Palmyra (Tadmur) to Aneh town, 190 kilometers to the West of Ramadi city, in Iraq, an intelligence officer in al-Anbar province said.

Nazzim al-Juqaifi was quoted by Sumeriya News as saying that after its occupation of a part of Palmyra in Homs province, the ISIL transferred a number of these weapons and equipment to Iraq.

He said that some of these arms and equipment were targeted by fighter jets.

According to the Iraqi officer, the equipment and weapons included BMP1 combat personnel carriers, tens of artilleries and other war instruments.

The ISIL kicked off a large-scale operation on December 8 with thousands of forces in Homs province to take control of Palmyra that was liberated by the Syrian Army in March 2016.

The ISIL took control over some energy fields and strategic heights and approached Palmyra.

The terrorist group finally entered the city of Palmyra on December 10, but the Russian and Syrian forces could repel their attacks, killing hundreds of them. Yet, the terrorists could take the city on late a day later.

4,000 fighters of the ISIL carried out again a large-scale offensive against government positions in Palmyra from several flanks and finally managed to capture the city on December 11, while only 800 army soldiers were defending the city and there was no possibility for aerial coverage by the Russian and Syrian warplanes due to bad weather.

A senior Syrian military expert said on Sunday that the ISIL terrorists could prevail over Syrian army’s defense lines and managed to capture the ancient city of Palmyra only after they received sensitive intel from the US.

Fateh Darboli, a retired Brigadier General of the Syrian army, said “the intelligence that the US provided to the ISIL about the positions and the number of Syrian soldiers deployed around Palmyra, assisted the terrorist group to occupy the historic city”.

Yet, he stressed that the ISIL may not be able to come forward any further, as it will soon be faced with crushing attacks by the Syrian army.

“Since T4 airbase and its nearby regions are safe, there will be no worries about the field situations in Homs countryside,” the expert added.

He went on to say that the ISIL terrorists that stormed and occupied Palmyra were the militants that had fled Mosul battlefields in Iraq towards Syria and then towards Homs to undermine the Army’s victories against Jeish al-Fatah in Aleppo.

The Syrian expert underscored that the desert nature of Homs province will be a great advantage for the army and popular forces, facilitating their advance against the terrorists, specially from al-Sukhnah region in Eastern Homs to Deir Ezzur province.