You are here: Home / Europe / ISIL recruits in the Balkans

What is making people from the Balkan Peninsula head to Syria and Iraq to join ISIL? 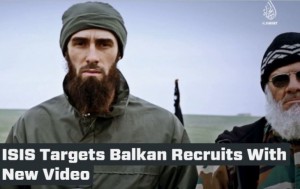 In the weeks leading up to her escape from ISIL-controlled territory in Syria, Noora, a Yazidi from Sinjar, was held captive in a three room-house to the northeast of Raqqa. Her captor was a young Bosnian woman who had travelled from the Balkans to join ISIL.

“She was really beautiful,” Noora said, “a white woman.”

“She had long blond hair down to her lower back. I had never seen anyone like that,” added Noora, who was 25 at the time.

Noora, who managed to escape with the aid of a smuggler and one of her brothers, told Al Jazeera how, during the eight months and 12 days she spent in captivity, she met fighters and their wives from Afghanistan, Britain, Germany and Bosnia, among other places.

Noora said that unlike the fighters, who she says stripped her of her belongings, “rings and necklaces”, transported her through territory newly captured by the Islamic State of Iraq and the Levant group (ISIL), and sold her into captivity, the Bosnian woman treated her captives “fairly”.

“She gave us enough food. She was good to us,” recalled Noora, from Dohuk in northern Iraq, one month after she escaped.

Noora’s name has been changed to protect her identity and the identity of her family who remain in ISIL-controlled territory. Fourteen close family members, including her parents and two brothers, remain in ISIL captivity or are unaccounted for.

A recent report published by the Soufan Group, an organisation that provides intelligence services to governments and multinationals, entitled Foreign Fighters, estimates that there are between 200 and 400 Bosnian nationals in Syria and Iraq.

While the number thought to have travelled to ISIL-controlled territory from the Balkans as a whole is relatively small – estimated to be around 900 by the same report – that figure is high enough to have raised concern among the region’s security forces.

In June last year, ISIL released a 20-minute recruitment video, “Honour is in Jihad,” aimed at encouraging potential Balkan recruits to come to Iraq and Syria.

In the video, a fighter identified as Abu Jihad al Bosni vows to, “bring our people out from the darkness and into the light”. Fighters from Bosnia, Albania, and Kosovo also feature in the footage.

“In the beginning, when we heard reports of Bosnians travelling to Syria, we were both confused, and concerned,” Ahmed Hrustanovic, an imam in Srebrenica, told Al Jazeera on a recent evening, after prayers.

“In our history, Bosniak history, we never went to another country to fight. We have only ever tried to make own country free and secure. But now, everything is changing.”

Mirnes Kovac, a Balkans political analyst based in Sarajevo, believes that the crimes committed by the government of Syrian President Bashar al-Assad have been among the motivators for Bosnians travelling to Syria to join ISIL.

“There is no crime in Syria that has been committed by ISIL that the regime of Bashar al-Assad did not proceed with an even worse crime,” Kovac said.

“When the international community is not responding in ways it needs to, we have a platform that radicals misuse [to recruit].”

The vulnerability of potential recruits, he added, is increased in Bosnia, where, “you have a post-conflict, transitional society which has economic issues and high levels of unemployment”.

Some observers are concerned that state institutions here have yet to develop the competency to fully stem the flow of recruits.

“[Balkan security institutions] have made efforts to slow recruitment, but it’s not at all enough,” Erwan Fouere, an associate senior research fellow at the Centre for European Policy Studies, said.

“The problem is that the institutions of state [in the region] are weak, parliaments are not functioning as they should. They don’t lend themselves, as they should, to supervisory roles to prevent [the] movement of people to Iraq and Syria.”

“If you add to that the very adverse economic situation in which potential recruits live, it does offer a breeding ground for [ISIL recruitment], even, though there isn’t necessarily a tradition of radicalism in the region,” Fouere concluded.

Hrustanovic believes it is the shared responsibility of state security forces, leaders of the religious community, and members of the public to stop the flow of vulnerable Bosnian nationals to join ISIL in Iraq and Syria.

“But I think the government and security services, should be doing more,” he added.

The Bosnian State Investigation and Protection Agency (SIPA) told Al Jazeera in a written statement that it is cooperating with the Bosnia and Herzegovina prosecutor’s office to take, “legal measures and actions against persons and organisations that may be linked to the latest developments in Syria and Iraq”.

However, Damir Pestalic, an imam in Srebrenica, believes the responsibility lies with government and security forces to do more. “The problem of people who are going to Syria [from here], is the problem of the Bosnian government.”

Figures from the Soufan Group report suggest that the number of foreign fighters in Iraq and Syria has more than doubled in the past 18 months.

Statistics show a similar pattern for those specifically from the Balkans. Authors of the Soufan Group report contend that this increase “is evidence that efforts to contain the flow of foreign recruits to extremist groups in Syria and Iraq have had limited impact”.

The first step in stopping this ideology must be for us to familiarise ourselves with it,” Kovac told Al Jazeera. “We need to understand the context it spreads in, how people are recruited to it and what kinds of individuals recruiters are targeting.”

“We need to understand, how we can tackle it and protect those people, predominantly young and underprivileged, who are exposed to the ideology.”