You are here: Home / MidEastGulf / ISIL poised to rise in southern Yemeni city: in midst of security vacuum, Aden could see surge of activity by Islamic State fighters and supporters 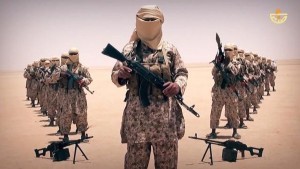 If planting a flag denotes a territorial claim, then the assortment of banners displayed across Aden southern Yemen are indicative of the complex web of players involved in attempts to control the city.

Various flags are coiled around poles at checkpoints, sprayed on walls, painted on cars, stuck on ammunition clips and cellphone covers. No single group’s leaders or followers have yet asserted control of the ruined city after many months of war.

Among the multitude of markers are three national flags: Saudi Arabia’s, the United Arab Emirates’ and the defunct socialist state of South Yemen’s, which is now a symbol of independence for the secessionists calling for renewed separation from the north.

Despite all these representations of nationhood, there is no state here or, most notably, any sign of the Yemeni tricolor. That flag — viewed by southerners as a vestige of northern oppression and now aggression — would indicate the government’s presence.

In the absence of the state, there is often another banner in Yemen. Not for the first time, the black rayat al-uqab flag, embraced by Al-Qaeda and subsequently assumed by the Islamic State in Iraq and the Levant (ISIL), can be spotted on walls in districts across the city.

When the combined forces of the predominantly northern Shia Houthis — along with loyalists of former President Ali Abdullah Saleh — descended on Aden in mid-March, their pretext for war was the city’s being a stronghold for Daesh (the Arabic acronym for ISIL). The Houthis and their supporters adopted the name as a blanket term to describe Yemen’s Al-Qaeda offshoot, Al-Qaeda in the Arabian Peninsula (AQAP), as well as the more recently emerged ISIL affiliate in Yemen. While this appellation overstated the presence of the two groups at the other end of the spectrum, representatives of the Yemeni government — who largely remain in self-imposed exile in Riyadh, Saudi Arabia — insist Al-Qaeda does not exist and that its presence in Aden is a Houthi-made myth. The reality lies somewhere in between.

As the last echoes of airstrikes and shelling rippled across the city to its Arabian Sea coastline last month and fighting drew to a close, the void where a government should be — along with the accompanying police force, army and municipal institutions — lay bare.

In its place is the motley throng of the Southern Resistance, a fighting force made up of local men defending their homes, former soldiers of the socialist-era army and, in lesser numbers, those fighting for religious reasons, including some elements from Al-Qaeda.

The common enemy — the Houthi-Saleh forces that united this disparate militia — is no longer a tangible threat. But in its wake is a population of disgruntled armed men looking for jobs, while AQAP and ISIL are looking to take advantage. The combination is potentially toxic.

“There is no single official group responsible for the security system of Aden,” admitted the commander in charge of the Southern Resistance, Aidaroos al-Zoubadi, who has been part of a group of leaders trying to resolve the issue of who will secure the city.

While the Southern Resistance busied itself with the military advance out of Aden into neighboring provinces last month, it appears the radical fighters were already thinking ahead and planning for the postconflict environment.

During the last few weeks of battle, members of the Southern Resistance noticed a surge in presence of ISIL men who followed the push into Lahij and Abyan provinces but, they say, never took part in the fighting. Loitering at the rear, they swooped in as the fighting subsided to loot heavy weapons and ammunition left behind when the Houthis fled. “They knew exactly where to look,” noted one field commander who observed the tactic repeatedly.

But in the increasingly gray area of who is and who is not AQAP or ISIL, trying to ascertain the actual threat posed by both groups is a difficult task. Among the young members of the Southern Resistance, bushy beards and lip-hugging mustaches became fashionable during the conflict in mocking defiance of the Houthis’ insistence they were all Daesh. Others describe themselves merely as fans of radical groups rather than fully fledged members or fighters.

The cruel twist of Aden’s conflict — sparked by the Houthi-Saleh forces, whose stated aim was to defeat AQAP and ISIL — is that the war appears to have had the opposite effect. More than four months of heavy fighting in a city under siege that left thousands dead has fueled the radicalization of young men and accelerated the rise of ISIL. Extreme acts of violence became the norm in a city where previously only soldiers carried guns. Although ISIL fighters never took part in the battle for control of the city, the group’s more openly brutal tactics, compared with Al-Qaeda’s, appear less excessive to some who are now familiar with bloodshed.

The Bureiqa district, also known as Little Aden, 20 miles west of the heart of the city, is the well-known birthplace of AQAP. Youths there say the group is being eclipsed by the popularity of ISIL, with a fan base fostered by “journalists” deployed to spread ISIL’s ideology through videos and propaganda songs.

“ISIL is bigger, better and stronger than Al-Qaeda now,” said Omar, 24, who became aware of the group in Aden only after the conflict began. With the infamous black banner stuck on the back of his cellphone, he gave only his first name and described himself as a fan of ISIL rather than a member of the group.

“ISIL is structurally stronger than Al-Qaeda in Yemen,” noted a Yemeni expert in Islamic groups who asked not to be named. The veteran scholar has observed the formation of ISIL in Yemen, which he says is based on intelligence gathering, similar to the methods used in Iraq and Syria. However, its leadership in Yemen consists of foreigners with experience garnered in Iraq and Syria.

Multiple self-proclaimed ISIL affiliates began stating their presence in Yemen over a year ago, with numerous splinter groups declaring themselves in at least seven provinces since then. The highest-profile attacks have been in the capital, Sanaa, where ISIL has claimed responsibility for several suicide and car bombings against mosques in the city — methods rejected by AQAP for their targeting of civilians.

ISIL and AQAP have openly expressed their differences at senior levels, with AQAP, in keeping with Al-Qaeda’s global policy, refusing to acknowledge ISIL as a caliphate or to pledge allegiance to it. Although the wave of young men who previously joined Al-Qaeda in Yemen are now gravitating toward ISIL, trying to separate who belongs to which is far from straightforward, especially since the two groups share a base on the sun-drenched shoreline close to Aden’s oil refinery.

Despite media reports of Al-Qaeda’s seizing territory in Aden, neither group has control over any of the city’s districts. But that does not rule out the potential for them to do so in the future. ISIL “will make a crack in the waist of Yemen,” warned the expert, referring to the group’s build toward taking territory across the county.

In order to break the flow of support for ISIL, the still largely absent and penniless Yemeni government is in a race against time.

Thousands of UAE troops, who arrived in Aden with tanks and armored personnel carriers in July on a mission officially described as one of reconstruction, are in the process of building and training a new police force. And thousands of Southern Resistance fighters are hoping for paid jobs in the fledgling security apparatus being created.

A salaried and well-trained force cannot come quickly enough. The city is already facing challenges from armed criminal gangs, assassins and vigilantism as well as splintering of the Southern Resistance as factions and their leaders vie for positions and territory amid the lawlessness.

Carjackings and armed robberies forced the International Red Cross to close up shop in recent weeks, and U.N. agencies looking to operate in Aden are considering the option of a boat offshore to house their workers.

Who will foot the bill for the new security forces in southern Yemen is unclear.  Mohammed Ali Maram, the director of exiled President Abd Rabbu Mansour Hadi’s office in Aden, said the Saudi-led coalition will provide the patronage for the city’s restoration. As yet, there seems little evidence of a sufficient flow of money to prop up even the existing institutions needed for the city to function. Aden’s refinery workers have gone on strike because wages have not been paid, and armed men from the Southern Resistance have blocked roads amid an increasing display of discontent over not receiving money.

Preventing the complete collapse of security in the city is the patience of thousands of destitute armed men with families to support, waiting for reimbursement — an atmosphere ripe for manipulation by groups such as Al-Qaeda and ISIL.

However, many observers of Yemen’s upheavals over the years are skeptical of the rise of ISIL. In the intricate maze of the country’s politics, with a history of its power players exploiting and utilizing armed factions, it would seem implausible to many that ISIL could emerge without some connection to the political elites, currently at loggerheads, whose influence has long filtered through the country’s tribal and military structures.

“It is certainly not impossible to think that ISIL in Yemen could have been manufactured to serve a political purpose,” said Nadwa al-Dawsari, a Yemeni conflict specialist and nonresident senior fellow at the Project on Middle East Democracy.

The relatively new ISIL has yet to reach critical mass in Yemen, while AQAP already has control of one southern city, Mukalla, which it seized in April. But it is amid the spreading lawlessness brought on by the current conflict as well as the competing domestic political factions with interests to serve that ISIL could find its greatest prospect for fulfilling its familiar Arabic tagline, scrawled on walls across Aden and the rest of the region, “Remaining and expanding.”