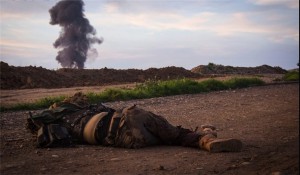 “Abu Izzam, ISIL’s oil minister, was killed by Iraqi security forces during the operations in areas and villages East of the city of Mosul,” al-Saedi said.

Earlier on Monday, Iraqi Federal Police Commander General Shaker Judat disclosed that his forces have discovered and seized the media center of the ISIL terrorist group in the city of Mosul in Nineveh province.

“The ISIL’s media center was captured in al-Mashraq square in the Southern part of Hamam al-Alil in Southern Mosul by the Iraqi Federal Police,” the Arabic-language al-Manar satellite TV quoted Judat as saying.

Judat went on to say that his forces also seized the ISIL’s visual equipment, including cameras and videos, as well as important documents in the media center.

Also on Sunday, the Iraqi forces seized back villages of Qara Tapeh, Kouri Qariban, al-Deravish and Abu Jarboubeh villages in the Northern flank of Mosul city.

Commander of Nineveh Military Operation Major General Abdel Amir Yarallah said in a statement that the ISIL terrorists sustained heavy losses and casualties in the tough battle with the Iraqi government forces.

Meantime, the Iraqi Defense Ministry in a statement disclosed that the country’s joint military forces have deployed new military tactics to surprise the ISIL terrorists and prevent them from disguise, and said the Baghdad government troops have recaptured several areas by applying the same tactics.

The defense ministry said that the Iraqi forces managed to take full control of al-Entesar, Jadideh al-Mofti, al-Salam, Younes al-Sabawi and Palestine districts by purging terrorists from a large number of residential complexes.

It noted that the Syrian army and their allies still continue their military advances in different districts across Mosul city.

On Saturday, a senior Iraqi commander announced that the country’s joint military forces have seized back over 360 villages and more than 5,600 square kilometers of lands in Nineveh province since the start of the Mosul liberation operation.

“Our forces have won back 369 villages and over 5,677 square kilometers of lands since the Mosul operation kicked off,” Commander of Iraq’s Joint Military Operations Lieutenant General Abdel Amir Rashid Yarallah said.

He noted that Iraq’s joint military forces have also destroyed 632 bomb-laden military vehicles of the terrorists during the Mosul operation.

On Thursday, Iraq’s elite Counter Terrorism Service (CTS) said they are progressing steadily in their operations to liberate the ISIL-held city of Mosul from its terrorist occupants.

CTS troops have entered the Northeastern neighborhood of Qahera, where they commenced operations to purge ISIL militants from it and surrounding districts.

“The troops made good progress in both directions according to plan. Troops heading South secured almost 70 percent of al-Ikha neighborhood, which is an important neighborhood,” he said.

He noted that the forces had now surrounded the al-Ilam, al-Tamim and al-Noor neighborhoods, and were preparing to cut off the supply routes to the al-Quds and al-Karama neighborhoods.