You are here: Home / MidEastGulf / ISIL militants say they had orders to bomb Turkish Parliament 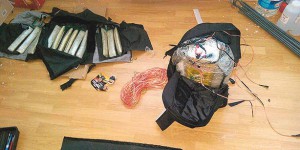 Two members of the extremist Islamic State in Iraq and the Levant (ISIL) group, who were detained by the Turkish police on Dec. 30, 2015, have reportedly stated during interrogation that they were instructed by a leading ISIL figure to carry out attacks on government buildings in Ankara that included Turkish Parliament and courthouses.

According to a report released by Cumhuriyet daily on Tuesday, the two terrorists who intended to carry out suicide bombings, Musa Canöz (28) and Adnan Yıldırım (40), stated that they received 20 days of training in preparing bombs and explosives in the Syrian city of Raqqa where the headquarters of ISIL are located.

“When we returned to Ankara we made our own suicide vests. Our main goal was to deal a deathly blow to the PKK [Kurdistan Workers’ Party]. However, we were later instructed to carry out attacks on governmental buildings. Then we begun to question this order to bomb Ankara courthouses, Parliament and police stations and gave up on the plan. While looking for a place to dispose of the bombs and ammunition we were caught by the police,” the militants reportedly said during the police interrogation.

Anti-terrorism police in Ankara had reportedly been closely following Canöz and Yıldırım for three months before they detained them in late December.

The raid came after the police deciphered the final message in a series sent by Enes, who is of Arab origin. During the raids, police seized hand-made explosives and bomb-making equipment produced by the two militants.

According to another report released by the Hürriyet daily on Jan. 1, the instruction was given to the two potential suicide bombers by a leading ISIL figure with the code name Ebu Enes, who is known to be a sheikh. It was also noted that the terrorists came to Turkey from Syria in September of last year where the attack was planned.

Mahmoud Al Ghanim, an ISIL militant who escaped from Erzurum State Hospital where was he receiving treatment under police custody by jumping out of a window, has still not been found, according to the Security General Directorate (EGM).

Ghanim was detained by the Turkish police in early December in Erzurum. However, he was placed in the Erzurum State Hospital due to injuries. The ISIL militant managed to escape from police custody on Dec. 12.

News of the escape came to the public’s attention after the EGM and the İstanbul and Erzurum Police Department’s counterterrorism units issued a circular to all 81 provincial police departments ordering them to tighten security.

Turkey has recently adopted a more aggressive policy against ISIL which, according to experts, led the ISIL leadership to consider attacking Turkey.

Several media outlets reported in previous months that, in a plan approved by ISIL leader Abu Bakr al-Baghdadi, 100 militants have been assigned to give military training to ISIL members and sympathizers in Turkey.

Russian news agency Sputnik reported on Sept. 30 that 100 ISIL militants have already entered the country to give training to sleeper cells. According to the agency, after crossing Turkey’s border from Syria in groups, the militants scattered to Adana, Adıyaman, Ankara, Diyarbakır, Gaziantep, İstanbul, İzmir, Kilis, Konya and Şanlıurfa. The militants were instructed to avoid unnecessary communication by phone. In addition to arms training, those ISIL militants in Turkey will also be taught to make bombs.