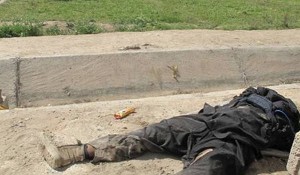 “ISIL Finance Minister Mohammed Zaalan al-Afari was killed in a booby trap ambush on the Gayara-Mosul road  after he took part in the opening of a women’s prison for those not committed to sexual jihad,” Saeed Mamuzini, a media officer of the Kurdistan Democratic Party’s (KDP) 17th branch in Mosul, said, Rudaw reported.

Afari was a former Iraqi army officer who joined the Takfiri ranks in 2004 and allegedly had close ties with ISIL leader Abu Bakr al-Baghdadi and the slain al-Qaeda leader in Iraq, Abu Musab al-Zarqawi.

“Alongside Afari four other militants were killed by the booby trap,” said Mamuzini, adding that the Mosul Independent Youth group have claimed responsibility for the attack.

On June 3, the Syrian troops managed to claim the life of Muhammad Ghalab Al-Moghair, the Takfiri terrorist group’s Foreign Minister along with his brother and two other militants during a major offensive  in Hasaka in Northeastern Syria.

Back in May, the Syrian army killed the so-called oil minster of the ISIL terrorist group in Deir Ezzur.

Also, Izzat Ibrahim al-Douri, Saddam Hussein’s Right-Hand Man and a senior commander of the ISIL Takfiri group, was killed during an operation by Iraqi popular forces in Salahuddin province in Iraq just a few months ago.

Additionally, the top war commander of the ISIL, Sheet Al-Samarrai who was called by the terrorist group as its war minister, was killed in an Iraqi airstrike on April 27 in Nineveh province in April.

On May 13, Abu Ala Afri, the successor of the Leader of the ISIL terrorist group Abu Bakr al-Baghdadi, was killed in an air raid in Nineveh province.

The ISIL Takfiri terrorists currently control shrinking swathes of Syria and Iraq. They have threatened all communities, including Shiites, Sunnis, Kurds, Christians, Ezadi Kurds and others, as they continue their atrocities in Iraq.