You are here: Home / MidEastGulf / Isil executes activists for smuggling out photographs 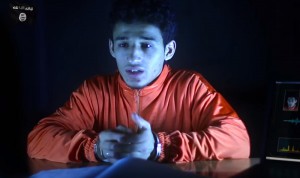 Militants from Isil have executed two men in the Syrian city of Raqqa for trying to smuggle out news of atrocities.

Their interrogations were shown in a video released by Isil on Sunday, in which they were dressed in the same orange jumpsuits that the group uses in many of its execution videos.

“I took photos in Rumaila, Tal Abyad, al-Wadi, streets, main and local streets, panorama, Isil members – anybody who comes in front of it, any street that has a base for Isil,” said Mr Salem, referring to areas that have been held by the extremists.

Sitting handcuffed in a darkened room, Mr Habeeb said he had photographed and filmed Isil positions using a smart watch, and later encrypted the files before sending them to Turkey.

The men were tied to trees and shot at night. They are believed to have been killed a few weeks ago.

After it overran swathes of Syria and Iraq last year, Isil rules between four and six million people. Membership of a group that smuggles out photographs or footage is punishable by imprisonment and even death. Inside Raqqa, there are two anti-Isil networks, called Raqqa is Being Slaughtered Silently (RBSS) and Eye on the Homeland.

The activists have often contradicted Isil’s official message, challenging the Islamic rulings that dictate behaviour, and reporting on the US-led air strikes that strafe the outskirts of the city. Last week, The Daily Telegraph obtained footage, shot by Eye on the Homeland, apparently showing three missing London schoolgirls in Raqqa.

Sunday’s video also briefly showed the face of an old man said to be the father of Hamoud al-Mousa, one of the group’s founders. He was reportedly killed three weeks ago.