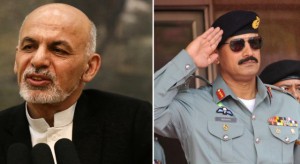 A source informed of the visit have told Voice of America (VOA)/Ashna that Gen. Rizwan Akhtar visited Kabul on Wednesday to meet President Ghani.

The source speaking on the condition of said Gen. Akhtar reaffirmed Pakistan’s support to persuade the Taliban militants to join peace process.

The visit by Gen. Akhtar comes as a two-day informal talks between the Afghan delegation and Taliban representatives concluded earlier this week over Afghan reconciliation process in Qatar.

In the meantime, the Afghan Senate House Speaker Fazal Hadi Muslimyar said earlier this week he is not optimistic regarding the peace process brought to us by Pakistan as the Afghan delegation is set to meet with the Taliban representatives in Qatar today.

Muslimyar said he is personally not convinced with the reconciliation process which comes through Pakistan and the main motive behind such efforts are not ascertained.

Muslimyar also added that both the Afghan and Pakistani governments should take practical steps in eliminating those groups who are funded from Pakistan, if both the nations are working together to bring peace and stability in the region.