You are here: Home / Africa / Is US troop deployment Boko Haram’s downfall? 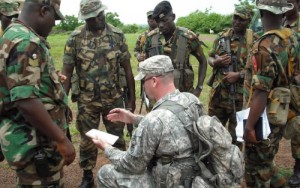 In an attempt to establish an Islamic caliphate governed by Sharia law and possibly re-create the old Kanem-Bornu Islamic Empire, Boko Haram is leading a ferocious campaign across the four countries surrounding Lake Chad on the edge of the Sahara Desert; namely, Nigeria, Chad, Niger and Cameroon.

Earlier in March 2015, the group became affiliated with Islamic State (ISIS) operating in Iraq and Syria. Since then Boko Haram’s leader Abubakar Shekau has taken a back seat and is yet to appear in any of the group’s videos. Following earlier appeals from Islamic militants from Sinai, Yemen, Syria and Iraq, Boko Haram is spurring al-Shabab in Somalia to become its ally by pledging allegiance to the leader of ISIS; in a bid to strengthen IS’s presence in Africa.

Amnesty International estimates that Boko Haram militants have killed at least 3,500 civilians in 2015. However, the trend in recent attacks shows Boko Haram has lost capacity to directly battle the Nigerian military and has therefore resulted to guerrilla warfare.

The Lake Chad Basin Commission (LCBC) was established in 1964 by the four countries bordering Lake Chad: Nigeria, Cameroon, Niger and Chad. As part of its mandate, the commission promotes regional integration, peace and security across the Basin. Incidentally, each partner state has been attacked by the Boko Haram militants.

The spate of suicide bombing within the region has surged since May. In recent months, Boko Haram has come
under increased pressure from Nigerian forces, and is increasingly unable to capture or control territory in Nigeria’s northeast. Despite this, it continues to attack soft targets such as markets and places of worship using mostly young boys and girls under the age of 17 as human bombs.

Within the first few days of October, Boko Haram conducted brutal attacks in Nigeria, Cameroon, Niger and Chad. Hours after two bombs exploded near a mosque in northeastern Nigeria killing at least 30 people, four female suicide bombers blew themselves up early Friday, October 16th killing at least 18 people and themselves: at least twenty people were also injure in the attacks. Thus though degraded, Boko Haram has shown its capacity to inflict significant damage remains.

The role of US troops in fighting Boko Haram

Deploying at the invitation of the Cameroonian government, American troops will provide airborne intelligence, surveillance and other reconnaissance (ISR) operations to support regional efforts against Boko Haram. During President Buhari’s visit to Washington in July, President Obama discussed strategies to end Boko Haram’s violent campaign, with a promise to provide military aid to the Multinational Joint Task Force combating the insurgency in the region.

An advance force of 90 troops was deployed to Cameroon on Monday, October 12th and is already coordinating its operations with the regional multinational force to provide better intelligence on the cross-border activity of Boko Haram. Hitherto, the multinational troops have relied largely on human intelligence in the ongoing counterinsurgency mission hence the intelligence gathering support from the United States is critical at this time.

With the release of the Chibok school girls serving as a strategic advantage, Boko Haram may be forced to quickly agree to a dialogue with the Nigerian government before the girls are rescued thanks to the intelligence support from US troops.

While the troops will not be involved in direct assault on Boko Haram or its locations though “equipped with weapons for the purpose of providing their own force protection and security”, their involvement will certainly be a game changer in the ongoing counterinsurgency mission.