You are here: Home / MidEastGulf / Is Turkey to send ground troops to Syria? 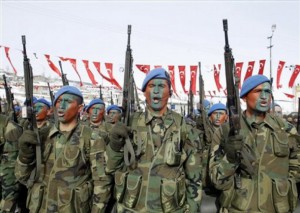 Turkey officials said Saudi Arabia and Ankara formed an anti-Syrian government pact that might involve ground troops. The Turkish government is planning on sending ground troops into its neighboring country Syria, the Turkish opposition Republican’s People’s Party Deputy Chairman Gursel Tekin said in an interview Thursday with the Turkish Taraf newspaper.
The government denied the claims. ​Gursel said that the government led by the Justice and Development Party, or the AK party, was planning the intervention in northern Syria on Thursday or Friday after setting up a buffer zone from where the troops can safely operate. The opposition figure added that the ruling party’s popularity was declining and thus it sought to boost its approval rates by undergoing a military “adventure” in Syria. The Turkish general elections are scheduled for June, and the ruling Islamic-rooted AK party, who has been in power since 2001, aims to secure a majority at the parliament that would allow it to independently rewrite the country’s constitution. The recent claims by Turkey’s opposition comes as unnamed Turkish officials told the Associated Press on Thursday that Turkey and Saudi Arabia had formed a pact that would aim at supporting Islamist groups and Syrian rebels and removing the Syrian President Bashar Assad.
According to observers, the recent news about a Turkish-Saudi alliance against the Syrian president highlights their frustration by the United States policy in Syria that has no intention of removing Assad. In fact, the U.S. State Department Secretary John Kerry said last year that if any solution was to be reached to the Syrian crisis, Assad and the Syrian government had to be included. In the past several years, Saudi Arabia and Turkey went through tense diplomacy as they did not see eye-to-eye on certain regional issues. Turkey supported the Muslim Brotherhood party both in Syria and in Egypt, while Saudi Arabia and its late king Abdullah bin Abdulaziz Al Saud viewed them as a threat.
Turkey angered Saudi Arabia when it offered refuge to several high-level Muslim brotherhood members soon after the coup in Egypt against their party’s democratically elected President Mohamed Morsi by the military commander Abdel-FattAh el-Sisi in summer of 2013. However, critics argue that Saudi’s new king Salman bin Abdulaziz Al Saud, who became the head of the kingdom in January, has moved away from his predecessor’s policy against the Muslim Brotherhood. “It’s a different world now in Syria, because the Saudi pocketbook has opened and the Americans can’t tell them not to do it,” said Joshua Landis, the director of the Center for Middle East Studies at the University of Oklahoma. “It’s quite clear that Salman has prioritized efforts against Iran over those against the Muslim Brotherhood.”
According to reports, the accord between Ankara and Riyadh was sealed at the beginning of March during Turkish President Recep Tayyip Erdogan’s visit to Saudi Arabia to congratulate the new king on his post. The agreement set in motion the groundwork for an alliance between several Islamist groups operating against the government in Syria. The alliance, calling itself the “Conquest Army” was formed at the end of March and, according to the Turkish officials, receives logistical and intelligence from Turkey, while Saudi Arabia provides the financial support for weaponry and operations. Some reports suggest that Turkey might also provide ground troops to support future airstrikes by the Saudis, supporting the claims by the opposition. Landis, however, warned that the recent pact could prove risky for both countries, especially for Turkey. “The cautionary tale is that every power in the Middle East has tried to harness the power of Islamists to their own ends,” he said, noting that Assad’s government also backed Islamists in Iraq who later turned their guns on him. “It always seems to blow back.”