You are here: Home / MidEastGulf / Is there a Sunni solution to ISIS? 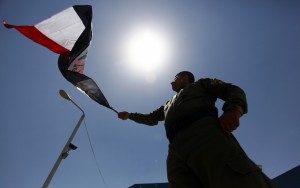 David Ignatius is right to recognize the importance of historical legacy to the rise of ISIS. He is also right to criticize the embrace of an “80-percent solution” to the reconstruction of Iraq after the U.S.-led invasion in 2003, whereby, as he puts it in his recent Atlantic essay on the roots of the Islamic State, “Kurds and Shiites would build the new state regardless of opposition from the 20 percent of the population that was Sunni.” Exclusion probably did encourage some Sunnis to first support the Islamic State of Iraq and then its successor, ISIS.

U.S. President Barack Obama has praised Iraqi Prime Minister Haider al-Abadi’s “commitment to an inclusive government where Shia, Sunni, and Kurds” are unified. The mechanism that would make something like this work, Iraq’s ambassador to Washington, Lukman Faily, tells Ignatius, is a federal system that could give Sunnis some “skin in the game.”

But the emphasis on the Sunni-Shiite-Kurd divide obscures divisions within the Iraqi Sunni population. In doing so, it oversimplifies the political bargain that has to be struck in order to win the war against ISIS, given that there is no single “Sunni” perspective toward central governance in Iraq. Much will depend on how a future system is administered. Iraq isn’t so much innately divided along ethnic and sectarian lines as it is fractured within ethnic and sectarian lines. Understanding these divisions is critical to defining political solutions that will produce meaningful inclusion of tribal and regional interests, whether in a federal system or some other arrangement.

Western Iraq, for example—especially Anbar province, where ISIS has a strong presence, having taken the provincial capital of Ramadi this summer—has long posed a governance challenge to the Iraqi government in Baghdad. This can be seen as both good and bad news. ISIS “control” over its territory in Anbar is not necessarily secure. It is clear from documents belonging to Saddam Hussein’s Baath Party, captured after the 2003 U.S. invasion, that even Saddam was hard-pressed to force his political will on the people of western Iraq, despite the sectarian identity they shared with his ruling Sunni regime. This tendency will complicate the process of governing the area for a Baghdad-based government, or ISIS, or any other party, as the United States learned after 2003. ISIS relies on extreme brutality to maintain control, but it may face resistance, just as Saddam did, even if it can keep the self-proclaimed caliphate intact.

The campaign to retake Ramadi is now the focus of the Iraqi government and its U.S. backers in the fight against ISIS. Abadi’s government is trying to take advantage of local enmities to organize Sunni tribal fighters to combat the Islamic State (just as these tribes came to oppose the Islamic State of Iraq, the parent of ISIS, during the U.S. troop surge beginning in 2007). But the effort is faltering due to distressingly familiar problems: Government-supported troops tend to be under-resourced and minimally trained, leaving them vulnerable to ISIS attacks or possible defection to the group.

Ignatius also hints at another problem in the battle with ISIS: that a Sunni military force “would have to operate from a secure base—not just a logistical base, but a base of trust, in which the Sunnis feel they are fighting for a part of Iraq that will truly be theirs post-ISIS.” And yet western Sunnis’ lack of trust in any Baghdad-based central government, however inclusive, can be expected to continue. This is not just because of the antipathy of Sunnis to Shiite rule, sectarian exclusion on the part of the Shiite-led Iraqi regime, or the misconduct of Shiite militias. Western Iraq’s location on the borders of Syria, Jordan, and Saudi Arabia makes the smuggling of people and goods a highly lucrative industry there, and residents’ alliances and rivalries often transcend national borders. As a result, Iraqi state infrastructure has long been challenged in those areas, even when Sunnis led the government. The long-term loyalty of the tribes is not guaranteed.

All of which is to say that history did not start in 2003, and that Anbar’s political disaffection has deeper historical roots. One is Saddam’s favoring of his Sunni clansmen from his hometown of Tikrit and its surrounding districts—in central Iraq, east of Anbar—who formed the backbone of his special military units. Western Sunnis from towns now occupied by ISIS were less privileged than Tikritis going into the 1990s, and the sanctions imposed on Iraq following its invasion of Kuwait hit them harder, weakening national cohesion within Iraq and within the Sunni community. For example, Sunnis from areas like Ramadi suffered from higher rates of child mortality in 1997 than Sunnis from areas around Tikrit, according to data from the 1997 national census. Certainly some of the prominent western tribes and their leadership benefited from association with Saddam, who was well aware of their influence and the need to manipulate their allegiances. But these tribal alliances with the central government were opportunistic, not deeply felt, and prominent Iraqis from the west became disaffected over time as a result of the suffering of their clansmen. By the time of the 2003 invasion, extreme poverty in Anbar towns like Al-Ka’im was more than three times the rate of extreme poverty in Tikrit, according to information collected by the United Nations World Food Program.

In more telling evidence of the history of restiveness in the region, attempts to overthrow Saddam at multiple points during the 1990s came predominantly from Sunnis with strong ties to the western provinces. Members of the Dulaim tribe—one of the largest in Iraq, with strong regional representation in Anbar province—revolted against the regime in 1995 after the execution of General Muhammad al-Dulaimi, who was suspected of plotting a coup against Saddam, and other Dulaimi officers. In 1996, officers associated with the al-Duri tribe—also prominent in Anbar province—were accused of attempting a coup; it’s likely that more coup attempts went unreported. This willingness to take extreme risks in order to rebel against a ruthless regime capable of harsh punishment has almost certainly not disappeared, as ISIS may learn.

Another division within the Sunni community centers on Sufism, a mystical and inward-looking strain of Islam that has proven more deeply influential in Anbar than in others parts of Iraq. Saddam closely monitored clerics from across the country, and in a regime census of Iraqi clerics during the 1990s, Anbar had the highest percentage of mosques with a Sufi orientation in the country. The Naqshbandi Army, an insurgent group known by its Arabic acronym JRTN, was established after Saddam’s death in 2006 and grew out of a Sufi movement headed by the Baath Party insider Izzat Ibrahim al-Duri. During the initial rise of ISIS, the JRTN seemed to have opportunistically joined the winning side, forming an unlikely alliance of Sufi-oriented former Baathists and Sunni extremists against the Shiite-dominated regime of then-Prime Minister Nouri al-Maliki. The union did not last long.

The complex—indeed confusing and contradictory—relationships among Baathists, ISIS, and the JRTN display the tenuousness of political loyalties in Iraq’s power struggle. JRTN’s position as a Sufi nationalist group with a strong presence in western Iraq suggests, however, that it will continue to be an important player in establishing political order in the area. The group certainly has the potential to be a spoiler in any negotiations for shared power between Sunnis and Shiites.

The Iraqi government’s retaking of Tikrit at the end of March represented a small but necessary step to securing territorial control over Iraq. Winning in Ramadi would be important for the regime’s credibility—especially if it is accomplished without the assistance of Shiite militias. But military victory won’t necessarily lead to political stability; as Saddam Hussein’s time in power teaches, the residents of western Iraq resisted control from Baghdad even when the Iraqi government was dominated by Sunnis. Saddam’s brutally repressive and ultimately narrow regime left many Iraqi Sunnis outside of his coalition. It is in the areas where these Sunnis were most numerous that ISIS is strongest today. The silver lining is that given the historical antipathy to authority in the region, ISIS may struggle to control Anbar province as well.