You are here: Home / Analysis / Is the return of a Gaddafi to power in Libya a realistic option? 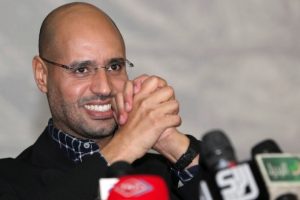 Ten years after Muammar Gaddafi’s death, Libya is in the midst of a fragile peace process aimed at ending a decade of chaos and bloodshed. The enduring turmoil has fostered a form of nostalgia for the Gaddafi era, with some Libyans even considering the prospect of seeing his son Saif al-Islam in power one day, like reported by france24.com.

Gaddafi, whose quixotic and brutal rule stretched over 42 years, was captured by insurgents on October 20, 2011, and then pronounced dead in his home town in circumstances that remain unclear.

Three of his sons – Mutassim, Khamis and Saif al-Arab – were also killed during the 2011 conflict.

However, the best known of Gaddafi’s offspring, Saif al-Islam, implicitly endorsed by his father to succeed him one day and once viewed in the West as a reformer able to democratise and liberalise Libya, is still alive.

Captured in November 2011 by an armed group in Zintan, southwest of Tripoli, Saif al-Islam was sentenced to death in absentia in Tripoli in 2015 after an expeditious trial. Wanted by the International Criminal Court (ICC) on charges of crimes against humanity, he kept a low profile for a long time, even after his release from a prison in Zintan in 2017.

Nostalgia for the Gaddafi years?

However, in July 2021, the 49-year-old broke his silence and gave an interview to the New York Times magazine.

With Libya set to hold a high-stakes presidential election on December 24, Saif al-Islam profited from this media exposure to announce his return to the political arena.

It is not the first time his comeback has been heralded. Back in March 2018, as if to test opinion, the Libyan Popular Front, a party that does not hide its pro-Gaddafi leanings, announced from Tunis that the son of “Africa’s king of kings” would be running for president.

In the NYT interview, Saif al-Islam, sporting a greying beard and dressed in a black qamis (traditional shirt) embroidered with golden motifs and a black turban, did not say if he would run in the December election. He did however say he was convinced that his movement could restore “the country’s lost unity”.

Since the interview, his political ambitions have been taken very seriously.

“It is not impossible to see a Gaddafi coming to power in Libya in the distant future. It is not completely unthinkable,” Emadeddin Badi, a Libya specialist and a researcher at the US thinktank, the Atlantic Council, told FRANCE 24.

“On the other hand, it is still too early today,” Badi cautioned. “So there is very little chance that, if he is a candidate, Saif al-Islam will win the presidential election in December.”

Nonetheless, the Gaddafi clan, and Saif al-Islam in particular, are still popular among nostalgics and officials of the former regime, and among the clans that remained loyal to the former dictator’s family. Pro-Gaddafi sentiment also lingers among a section of the population, disappointed by the chronic instability and violence that has roiled the country over the past decade.

It is this wave of disenchantment, which the returning Gaddafi intends to surf.

“There is no money, no security. There is no more life here. Go to the gas station: there is no gas. We export oil and gas to Italy. We light half of Italy and we have power outages here. This is more than a failure. It’s a fiasco,” he told the NYT.

“In recent years, Saif al-Islam Gaddafi’s standing has only increased in certain communities, especially for economic, security or political reasons, which arouse much more nostalgia for the Gaddafi years than in the early years after the fall of the regime, when no one was talking about a return of this clan,” Badi says.

Ironically, he adds, “this phenomenon is even perceptible at the level of the younger generations, who were not yet mature during Gaddafi’s lifetime, and who have not really experienced the true nature of his regime.”

Saif al-Islam, an option for the Russians?

The mere fact that Saif al-Islam’s return to power is contemplated as a plausible scenario says a lot, not only about the current state of the Libyan political class, but also about the geopolitical strategies of foreign powers, Badi adds.

“We must not forget that his first media appearance was reserved for the New York Times. However, the Libyan public is not used to reading this American newspaper. The message was addressed to a foreign audience and particularly to countries most likely to accept a return to business for his clan.”

Indeed Saif al-Islam remains a political option that may still interest some foreign actors in the Libyan conflict, including Russia. Especially, if they don’t find Marshal Khalifa Haftar, a protégé of Moscow, useful anymore.

“While it will be very difficult for Saif al-Islam to enjoy internal legitimacy, he can however count on external support,” Badi says.

“Russia, which has always maintained political, military and even economic relations with the Gaddafi clan, may seek to promote, or even impose, a return to a clan-based form of governance, for example, by relying on him,” he adds.

However, apart from the complications that may arise from his conviction by a Libyan court and the ICC arrest warrant, the prospect of seeing a Gaddafi back in business is far from decided. The Gaddafis have many enemies who will do everything to prevent him from returning to politics.

“Even the Gaddafi camp itself is much more fragmented than some imagine,” says Badi. “This is due to divisions linked to the very image of Saif al-Islam, perceived by some as responsible for the fall of his father because of his positions, which were considered too moderate before the events of 2011.”

“Even if he were to come to power, it would be very difficult for him to establish his authority throughout Libya, given how fragmented the country is,” Badi concludes.

“Saif al-Islam Gaddafi must surely know that Libya is much more complicated than it was in 2011, at the time of his father’s death.”