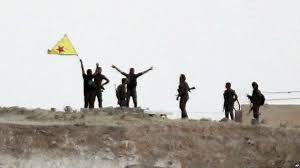 Kurdish-led authorities in northern Syria have declared a new province including a town on the border with Turkey captured from Islamic State in June, a Kurdish official said on Wednesday, formalising Kurdish control over the border area.

The Syrian Kurdish YPG militia captured the town of Tel Abyad with the help of U.S.-led air strikes. The new administrative province, or canton, is the fourth declared by the Kurdish administration in northern Syria.

“It has been officially announced as a canton,” said Delil Osman, a media official in the Kurdish-led administration. He was speaking via Skype, and did not say when the announcement was made.