You are here: Home / Mediterranean / Is something change for Haftar in Libya?

The British, French Italian, and US ambassadors to Libya also warned in a joint statement on 14 March that ‘Russia was trying to do in Libya what it did in Syria’ 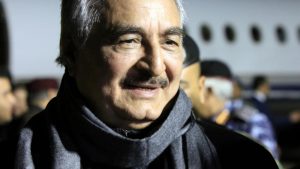 The conflict in Libya is not yet showing any signs of resolve, with the main parties still locked in a false belief that they can win and take full control of the country at the expense of their opponents, like reported by alaraby.co.uk.

In giving continuous support to one side or the other, some of the regional and international players involved are also effectively pouring more fuel on the fire.

However, some local and international alliances are shifting, thus changing the dynamics of the conflict and possibly its eventual outcome.

Since his election, many players in Libya and the region have been waiting to see the direction Trump will take on Libya. But almost three months after his inauguration, the US president has yet to appoint a new special envoy to Libya.

However, on Monday 10 April, a senior US military official met with General Haftar in Abu Dhabi, where Haftar allegedly expressed his plans to fight and eradicate “terrorism” in Libya. This is a clear attempt by Haftar to persuade the new US administration to back him and his campaign.

President Sisi of Egypt visited Washington recently and is believed to have asked Trump to support a more influential role for Egypt in resolving the Libya conflict. As a prelude to this role, Egypt appeared to be sending signals that it is shifting away from its one-sided approach of total support of General Haftar and his allies, within the House of Representatives (HoR) in the east of Libya.

On 15 February 2017, Egypt officially received a high level delegation from the anti-Haftar Tripoli based High State Council. This was the second visit by Council members to Egypt within few weeks; the first one was on 5 January and was preceded by five others with Libyan parties mainly from the Tripoli based GNA supporting camp.

Egypt has been keen to give the impression that it has open channels with – and can talk to – all Libyan sides in the conflict. Sisi hopes that this will persuade the international community, especially the new Trump administration, to allow Egypt to be the dominant broker in resolving the Libyan conflict.

Algeria on the other hand, which has been working on a Libyan peace initiative, jointly with Tunisia and Egypt, has privately complained that Egypt is trying to exclude it from an important role in resolving the Libyan conflict.

Algeria is still pursuing very active diplomacy by inviting numerous delegates from both sides of the Libyan divide over the last few months. It has also been coordinating closely with Tunisia to finalise details of the proposed joint initiative with Tunisia and Egypt.

Haftar reportedly recently refused an invitation by Tunisia’s president to visit Tunis, accusing Libya’s neighbour of supporting the Tripoli-based GNA and the Muslim Brotherhood. The invitation demonstrates the Tunisian presdient’s will to involve all Libyan players in talks about the country’s future.

Other important Arab players such as the UAE and Jordan, who have been seen as offering Haftar much needed logistical and military support, have recently fully endorsed the GNA headed by Fayez Serraj as the only legitimate representative government of Libya.

This shift came during the recent Arab summit hosted by King Abdallah of Jordan, where Serraj attended in his capacity as the head of the Libyan Presidential Council (PC). The Arab leaders meeting in Jordan “have given their absolute support for the Presidency Council (PC) and indicated that they will drop any links with the Beida-based interim government headed by Abdullah Al-Thinni” and supported by Haftar.

France, which has also been seen as offering some support to Haftar’s forces, seems to have adjusted its position to fully back the Tripoli based GNA. Just last week, GNA head Fayez Serraj met in Tunis with French Prime Minister Bernard Cazeneuve and gained the commitment of France’s support.

Cazeneuve also insisted that all military forces in Libya had to be under civil control. This sends a clear message that France believes Haftar should be answerable to the political leadership of the GNA in any military role he may play.

On 5 April, GNA head Fayez Serraj was also in Stuttgart, Germany to meet with the head of the United States Africa Command (AFRICOM), General Thomas Waldhauser. The AFRICOM head reiterated the standard US line that it remains supportive of Serraj and his Government of National Accord.

When testifying in Washington to the Senate Armed Services Committee on 14 March, Walkhauser warned that Russia’s involvement in a war-ravaged Libya “is very concerning”; he also stressed that Russia posed a threat to Western interests in Libya.

Such public concern by this high profile American General indicates that the Trump administration may be persuaded by its top military officials to confront any aspiring Russian influence in Libya, especially in light of the tough stand taken by Trump recently against the Russian sponsored and supported Assad regime of Syria.

The British, French, Italian, and US ambassadors to Libya have also warned in a joint statement on 14 March that “Russia was trying to do in Libya what it did in Syria.”

Inside Libya, major shifts in influence and alliances are also taking place. The Tripoli based GNA, which was an outcome of the Libyan political agreement (LPA) signed by all sides in Morocco in December 2015, is becoming more and more involved in the conflict, upping the ante against the head of HoR Ageela Saleh and General Haftar in the east.

The GNA has also ordered loyal military groups based in Tripoli to squeeze out other groups that have been hostile to the GNA’s rule. This has resulted in serious fighting flaring up in many districts of the capital.

In addition, the GNA recently ordered forces loyal to it to fight forces loyal to Haftar in the south of the country, in order to prevent them taking control of the region.

General Haftar, who launched his “dignity” military operation almost three years ago, with the stated aim of “fighting terrorism” and ridding Benghazi of extremist groups, has in recent months extended his military operation to the “oil crescent” region some 200km west of Benghazi and now to the whole of the south of Libya.

This shift in scope by Haftar seems to reaffirm his opponents’ fears that his real aim is to slowly edge towards the west of Libya, and close in on the capital Tripoli, in order to achieve total military control of the whole country and return it to the era of a one man military dictatorship.

The dynamics of the Libyan conflict continue to fluctuate according to the policies of regional and international key players.

However, the reality of Libya remaining deeply mired in violence, chaos and socio-economic hardship is still a daily reality for its citizens.

While the key players are jostling for power and control at the expense of their opponents, the badly needed spirit of compromise and accord seems to be still far eluding them.

There now appear to be three possible scenarios: The first is that the GNA somehow wins a HoR vote of confidence, allowing the LPA to be implemented as it currently stands.

The second is that Haftar imposes total military control over the east and south of Libya, and strives to move on to the west of Libya, including the capital Tripoli, leading to further prolonged bloody conflict in the country and a possible de-facto divide of the country.

The third, most plausible scenario, is that the current Tripoli-based GNA/State Council political alliance comes to an agreement with the Haftar/HoR leadership alliance in Tobruk, amending the LPA on a compromise deal that accommodates the key players and helps bring Libya back from the abyss.