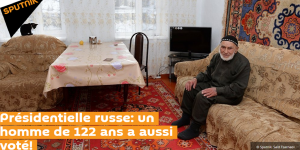 “Russia’s presidential election: a 122-year-old man also voted!” Sputnik reported on Sunday, the day of Russia’s Presidential election. “The oldest man in Russia, who is 122 years old, voted in the elections”, RIA informed, also on Sunday. “The oldest man in Russia has voted in Ingushetia”, NTV told on the same day, like reported by euvsdisinfo.eu.

Other state-controlled Russian media also picked up the story about 122 year old Appaz Iliyev from the Russian Republic of Ingushetia. The aim, it would appear, was to let a human interest story and a fun fact about the elections distract audiences from negative reports about election fraud, pressure from propaganda and the “restrictions on the fundamental freedoms of assembly, association and expression, as well as on candidate registration” described by the OSCE in its preliminary conclusions.

But should we believe what we are told about the 122 year old voter? NTV refers to Mr Iliyev having been listed in a booked called The Book of Records and Achievements. Sputnik’s story simply quotes the electoral commission in the Republic of Ingushetia where the voter lives, whereas RIA sources a spokesperson for the Head of the Republic for the information about the voter’s age.

Mr Iliyev’s name does not appear either in this international list of verified oldest people ever to have lived, or in this verified list of the world’s currently longest living people, where the first place is held by a 117 years old Japanese female citizen, and where the oldest verified male is 112 years old, and also from Japan. To say the least, if the information about the voter’s age is true, it would be a sensation.