You are here: Home / Analysis / Is regime change imminent in Tehran? 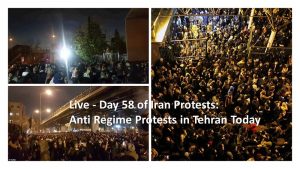 The Iranian people are protesting against the mullah’s regime. They are angry that 176 people were killed on a passenger airplane, which was targeted by an Iranian missile. Increasingly, the Iranian people are viewing the Iranian regime, not America and not Israel, as their enemies and are demanding that their leaders step down. However, is this enough in order to bring about regime change in Tehran, like reported by inn.com?

Iraqi human rights activist Mr. Al Hamadani, who is a good friend of the State of Israel and seeks the establishment of an Israeli Embassy in Baghdad, believes that we have an obligation to support the Iraqi and Iranian protests, regardless of their chance of success, for otherwise our future is quite bleak.

Mendi Safadi, who heads the Safadi Center for International Diplomacy, Research, Public Relations and Human Rights, believes that the death of former Al Quds Force Chief Qassem Soleimani was a game-changer: “Alongside the angry demonstrations in Iran that call for the departure of Khamenei, the refusal to step on American and Israeli flags at Tehran University and the tearing up of pictures of Qassem Soleimani, there is a confusion in the mind of the regime that indicates a vacuum following Soleimani’s elimination.”

This vacuum can especially be felt in countries that are under the grip of the Iranian regime, such as Iraq. “In Iraq, the militias have disappeared from the streets and their leaders do not appear like their predecessors,” Safadi claimed. “The protesters are beginning to sense that the cloud of oppression and the fear of the militias that was felt one week ago has been lifted. Another step that could complete the end of the Khamenei era is if a foolish Iranian move provokes US forces, leading to a significant clash with US forces. This step could destroy Iranian proxies in Syria and Iraq.”

Given this power vacuum, Iraqi human rights activist Mr. Al Hamadani concurs that eliminating Soleimani was the correct decision: “Eliminating Soleimani was necessary for global peace and security. He led the militias loyal to the Iranian regime in Iraq, Syria, Yemen, Lebanon and Gaza, who are responsible for killing and displacing millions of people. He planned terror attacks against opponents of the Iranian regime in Europe. He planned to launch major terror attacks against American forces, tried to get the American forces out of Iraq, overthrew the Iraqi political system in favor of the Iranian regime, controlled Iraq’s oil wells and stole Iraq’s wealth. Not to mention, they were responsible for bombing Israel by providing Hamas and the Islamic Jihad with missiles.”

However, Iranian journalist Neda Amin does not believe that the death of Soleimani and Iranian public discontent following the downing of the civilian aircraft is enough in order to bring about regime change in Tehran: “Without American support, regime change is not possible. They will just kill people. However, the Majles (Iranian Parliament) does want Rouhani removed, so that the Iranian Revolutionary Guards can take more power. Yet, the demonstrations will be crushed. Many Iranians will go to prison and die. This regime cannot be beaten by a few demonstrations.”

“These demonstrations can make them weak but that is it,” Amin noted. “The regime has the power, money, guns and support of Russia. With the elimination of Soleimani by the US, their power decreased in Iraq, in Syria and the greater Middle East but they moved their power and influence to Iran in order to harm Iranians. They seek to attack Iranians. Because they are Iranians inside of Iran, the world will do nothing. The UN watches every day and every hour Israel is in Gaza but they don’t care about the plight of the Iranian people.”

The question remains, will the US select to take stronger action against the regime in Tehran beyond what they have already done? At this point, it is hard to tell. Trump is, predictably and purposely, unpredictable. While Trump did state that he is not seeking regime change in Tehran, Trump warned Iran’s leaders on Twitter: “Do not kill your protesters. Thousands have already been killed or imprisoned by you and the world is watching. Most importantly, the USA is watching. Turn your internet back on and let reporters roam free. Stop the killing of your great Iranian people.”

In fact, Trump has even tweeted in Farsi in solidarity with the Iran protests. As could be expected, the Iranian leaders did not heed the warning and have opened fire upon the Iranian demonstrators. The mullah’s regime also mocked Trump’s Farsi tweets. Now, it remains to be seen whether Trump will take action or merely continue the war of words.

Iranian political theorist Dr. Reza Parchizadeh believes the time has come for America to act: “America made a huge mistake four decades ago by not seriously responding to the Islamist invasion of Iran that eventually engulfed all of the Middle East. Its shadow threatens the West and the rest of the world today. What started with the US Embassy takeover and the American Hostage Crisis of 1979 by the Islamists has now grown into a full-blown offensive on American security interests across the Middle East. And it is not just the US regional allies such as Israel, Saudi Arabia and the UAE that are struck by the Islamists. Today, American herself is under fire. This offensive against American security interests by the Islamists and their global allies will only continue to escalate if it is not decisively dealt with.”

Iraqi human rights activist Mr. Al Hamadani concurs with Parchizadeh: “Regime change in Baghdad and Tehran will enable America to support the Iraqi and Iranian people to achieve international security. I ask both the US President and American Congress to support the demonstrations in Iran and Iraq, and to continue to press the Iranian and Iraqi regimes so that both peoples will obtain freedom and will rid themselves of dictatorial regimes. Remember, supporting the Iraqi protests helps to cut off financial support for the Iranian regime and thus helps to weaken the mullah’s government in Iran.” A weakened Iranian regime will make it easier for the Persian people to overthrow their tyrannical government.

However, former Israel Consul General Dr. Yitzchak Ben Gad noted that the US presidential elections are in 2020 and he fears that a US-led war against Iran would not help Trump’s re-election campaign. Nevertheless, for Israel’s sake, Ben Gad hopes that this is not an impediment for President Trump: “The US acting against Iran is good for Israel. The mullah’s regime believes that Israel has no right to exist here and must be destroyed. They dream of having a Persian Shia Empire in the Middle East. Over the past few months, they have been attacking the US and their allies. They shot down a US plane over the Persian Gulf. They attacked the oil fields of Saudi Arabia. And they provoked Bahrain by trying to place the Shia in power.” This does not even include the attack upon the American Embassy in Baghdad and the missile attack on the military base in Kirkuk, which killed an American contractor. In fact, Iran has targeted US forces with ballistic missiles on multiple occasions.

In conclusion, regime change is still possible in Tehran, if the US wishes to invest in it. However, despite some hopeful sentiment, that is not likely to happen during an election year, especially when President Trump is under heavy fire for eliminating Soleimani by his Democratic opponents, who are prone to appease tyrants rather than to fight against them.

The only way that regime change could happen at this time is if Tehran is foolish enough to shoot down an American airplane with 176 people on board or to commit another terror attack of similar magnitude. While the Europeans may be satisfied to receive an apology and financial compensation for the victims’ families, Trump would not react that way. He would view it to be an act of war and would then clamp down upon the mullah’s regime in full force, should Tehran treat any American target how they treated the Ukrainian airplane.