You are here: Home / Mediterranean / Is Putin attempting to intervene in Libya militarily? 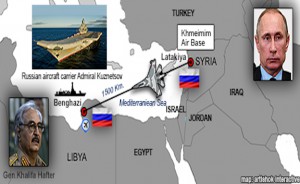 Many reports referred to Russian attempts to military intervene in Libya in support of the army led by General Khalifa Haftar, who is aided by Egypt and some regional countries.

According to the Israeli intelligence website, Debka, if Russian attempts succeeded, Russia will establish the second military air base in the Mediterranean, about 700 Km off Libya”.

Debka also said that the Russian President, Vladimir Putin, is preparing to establish a naval air base off Benghazi coast, like Hmeimim base close to Latakia, in exchange for naval and air support to Haftar”.

It also added that some elements in Egypt and the Gulf prompted Haftar to request the Russian support, he arrived in Moscow, on Sunday, to discuss the military support that Russia can provide him. It is the second time Haftar travels to Moscow in six months, following the previous visit in June, as he met Defense Minister Sergei Shoigu, then the Russians were not ready to provide overt military support to the Libyan general.

Debka clarified that after the election of Donald Trump, the US president, and with speculations about American – Russian cooperation in the war Daesh in Syria, Putin said he is willing to expand such cooperation to Libya. The Israeli website reported that Russia is offering Haftar armaments of fighting jets, armored vehicles, and missiles.