You are here: Home / MidEastGulf / IS militants detonate themselves in southern Kirkuk after Peshmerga surround them 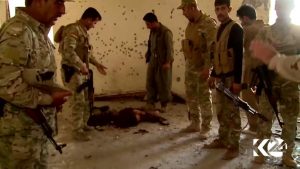 Peshmerga forces on Sunday morning repelled an Islamic State (IS) attack in Khurmatu town located in the south of Kirkuk Province, like reported by kurdistan24.net.

The attack on the Hlewa air base in Khurmatu was carried out by four IS suicide bombers.

“They come from the Hawija and Rashad areas,” Peshmerga Commander Jamal told Kurdistan24.

He mentioned the attackers appeared to be foreigners rather than Iraqis.

“Some of the attackers were killed, and the remaining ones blew themselves up after they found out they were trapped,” he said.

“Not a single casualty from the Peshmerga side,” Commander Jamal added.

One of the Peshmerga soldiers who participated in the fight told Kurdistan24 the insurgents went to a hall in the area and tried to fight the Kurdish forces from there.

Kurdistan24 correspondent Hemin Dalo showed the aftermath of the attack in the area where the pieces of the militants’ bodies were left scattered on the ground inside the hall.

“They blew themselves up inside the building because they were surrounded and ran out of ammunition, grenades as Peshmerga left them no room to escape,” a Peshmerga soldier said.

The Peshmerga are one of the most effective ground troops defeating IS, former US Secretary of Defense Ashton Carter had previously said.

Over 1,700 Peshmerga soldiers have fallen while fighting the extremist group since June 2014 and 10,000 more have been wounded, according to the Peshmerga Ministry.