You are here: Home / Mediterranean / IS militants are advancing to Libyan interior: French minister 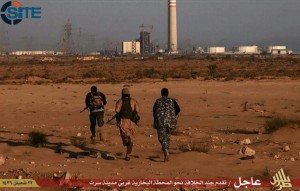 French Defence Minister Jean-Yves Le Drian said on Monday that the Islamic State group was spreading from its stronghold on the Libyan coast to the interior of the country with the aim of getting access to oil wells. – See more at: http://www.middleeasteye.net/news/militants-are-advancing-libyan-interior-french-minister-1893442970#sthash.kBPA277h.dpuf

“They are in Sirte, their territory extends 250 kilometres (155 miles) along the coast, but they are starting to penetrate the interior and to be tempted by access to oil wells and reserves,” Le Drian told RTL radio.

A US and Italy-led coalition of world powers and regional players on Sunday urged Libya’s warring factions to lay down their weapons and back a new national unity government under a UN peace plan due to be signed on Wednesday.

US Secretary of State John Kerry was among ministers and officials from 17 countries who, along with the UN, the EU and the Arab league, called for an immediate ceasefire across Libya.

They pledged support for efforts to end the chaos that has engulfed the North African state since the 2011 overthrow of Moamer Gaddafi, and to reduce the risk of Islamic State (IS) expanding its presence.

“We came here today because we cannot allow the status quo to continue,” Kerry said at the close of talks attended by 15 officials from different wings of Libya’s splintered political class.

“We refuse to stand by and watch a vacuum filled by terrorists.”

Kerry dismissed criticism that the proposed Government of National Accord was being imposed from outside in the absence of consensus on the ground, and amid a security situation which makes it uncertain that the new administration will be able to base itself in the capital Tripoli.

“This is a process driven by Libyans, they are determined to do this,” the top US diplomat said.

The ministers were joined in the afternoon by the Libyan officials from factions in the country’s rival parliaments, one based in Tobruk and another assembly in Tripoli.

Some representatives of both assemblies have tentatively agreed to sign the UN plan in Morocco on Wednesday but it remains unclear how much opposition it will encounter.

Kerry insisted that majorities of both parliaments supported the peace plan and said only fringe players were obstructing progress.

The figures who had come to Rome “have decided they are not going to let Libya be the prisoner of one or two people or small groups,” he said.

UN envoy Martin Kobler, who brokered the accord due to be signed on Wednesday, said: “They represent the majority, the voice of the people of Libya.”

The accelerated diplomacy reflects fears in Western capitals that instability in Libya will allow IS-allied groups to expand beyond a small section of coastline they currently control around the city of Sirte.

Anarchy in Libya has also given people traffickers a free hand to use the country as a launchpad from which hundreds of thousands of migrants have been sent to Europe in the last two years.

European governments want that route closed off amid fears a looming humanitarian crisis in Libya could accelerate the flux.

France’s representative at the talks, Harlem Desir, told reporters: “We cannot accept a situation of political chaos where terrorism thrives. It is a threat to the security of the region and to Europe.”

Italian Foreign Minister Paolo Gentiloni hailed Sunday’s talks as “a turning point in a crisis that has lasted far too long” but acknowledged that the stabilisation of Italy’s former colony would require a long term commitment.

The upbeat tone of the conference’s hosts contrasts with the prevailing pessimism among many Libya-watchers about the prospects of a new administration leading to sustainable peace.

Writing in Politico, the pair said it is “wishful thinking” to believe a majority of Libyans will back a foreign-backed sole national authority.

If the government cannot return to Tripoli, it will have no control over state administration and attempts to force the issue could trigger renewed fighting, they argue.

Alison Pargeter, of Britain’s Royal United Services Institute, said ahead of Sunday’s talks that it was difficult to be optimistic.

“The country needs a proper reconciliation process. At the moment the largest tribes are outside the process. Because they were pro-Gaddafi, they are completely on the sidelines.”

Under the UN plan, the new government is to be formed within 40 days of the accord due to be signed in Skhirat, Morocco on Wednesday.