You are here: Home / Analysis / Is Iran’s Revolutionary Guard a terror group? 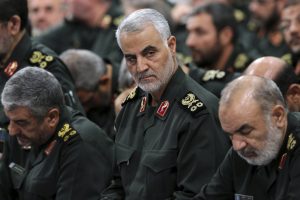 Soon after the Shah of Iran was forced from power in 1979, a small group of the uprising’s young leaders suggested the creation of a national guard, tasked with preserving the new Islamic revolution – and counterbalancing the country’s conventional military, like reported by theguardian.com.

Ayatollah Khomenei – the charismatic cleric who soon became the country’s supreme leader – hesitated to call the members of the new force “guards”, fearing that the word was too close to the French word widely used to refer to the ousted monarch’s elite personal guard.

Instead, he opted for Sepah – a Persian word for soldiers with historical connotations – and the new force became known as the Sepah-e-Pasdaran or “army of the guardians”.

Most foreign governments, however, refer to it as the Islamic revolutionary guard corps – a force that, 38 years later, has become a key player both inside Iran and across the region.

Reports that the US government is poised to designate the IRGC a terrorist group have sparked jitters in Tehran, even overshadowing Donald Trump’s expected plan to tear up the landmark nuclear deal.

The US accuses the IRGC of terror mainly because of their military support for Hezbollah and Hamas, organisations that have been designated as terrorist groups both by the US and the European Union. Trump has argued that Iran’s support for such groups “violates the spirit” of the nuclear deal.

In private Iranian officials say that Trump’s ability to unravel the nuclear deal is bound by the US Congress and the reaction of Washington’s allies in Europe. But, they warn, a move against the guards would be a step too far – and could even push the two countries towards open war.

In Tehran political leaders are keen to show unity. Earlier this week a smiling corps commander, Mohammad Ali Jafari, was photographed arm in arm with the foreign minister, Mohammad Javad Zarif, architect of the nuclear deal.

Jafari has said that US military bases in the region would be open to attack if his forces were designated a terrorist group. Zarif’s ministry has said that Tehran’s reaction would be “firm, decisive and crushing”. And on Wednesday the moderate president, Hassan Rouhani – who just five months ago made a rare public criticism of the guards during his run for a second term – issued his full-throated support for the force, saying that “the IRGC has a place in people’s heart”.

Farideh Farhi, an academic who closely monitors Iranian affairs, said that designating the IRGC as a terrorist group would be unprecedented.

“The IRGC is a integral part of Iran’s military defence and has constitutional standing as such. The designation of military officers of another country as terrorist will be a first and will open the US military to reciprocal action,” she said.

Particularly at risk, Farhi said, would be US special forces operating in the Middle East.

The IRGC initially operated as a local force across Iran, but it expanded quickly after Saddam Hussein invaded Iran in 1980 and Khomeini allowed the corps to have its own ground, navy and air forces.

The IRGC played a key role in the defence of Iran, especially in the Strait of Hormuz, where it used small speedboats to stop oil tankers used by Hussein and his allies.

“Before the war the IRGC militiamen were nothing more than bodyguards to the clerics. Their performance in the war gave them a seat at the proverbial power table,” said Mehrzad Boroujerdi, professor of political science at Syracuse University in the US.

But Khomeini remained wary of its growing force, writing into his will an explicit command for the Sepah to stay away from politics.

After succeding Khomeini in 1989, Ayatollah Ali Khamenei introduced a new dimension to the IRGC’s operational capacity by creating the Quds force, which is in charge of its overseas operations and has worked closely with Hezbollah in Lebanon and Hamas in Palestine.

But Tehran has never concealed its backing for Hamas and Hezbollah, which it sees as legitimate political parties who have legally won elections, said Ali Alizadeh, a London-based political analyst.

And while such activities have infuriated the US and Iran’s regional rivals, the IRGC’s activities in Lebanon, Bosnia, Iraq – and more recently their involvement in propping up Syria’s Bashar al-Assad – have hugely endeared them to Khamenei.

The US also alleges that Iran has been behind a series of bombings in Iraq that has led to the death of US military personnel, accusations that Iranian officials say are not substantiated. A string of top brass at the IRGC and Quds forces are already blacklisted and subject to US sanctions.

Despite the dying wishes of Ayatollah Khomeini, the IRGC did become politically active – most notoriously when its Basij militia helped to crush protests after the disputed 2009 elections.

Soon afterwards the IRGC launched a bid to restore its tarnished domestic image by presenting Qassem Suleimani, the commander of corps’ Quds force, as a national military hero who has defended the country from Sunni terror groups.

“When it comes to the current imploding situation in the Middle East, Khamenei is much more prone to listen to the Jafari and Suleimani than to Rouhani or Zarif,” said Boroujerdi. “The guards’ institutional capability to exert influence on foreign, domestic and security policies is beyond doubt now.”

After years operating in the shadows, Suleimani – who was often portrayed as a kind of regional puppet-master of terror – has emerged into the limelight, his presence on the battlefield of Syria and Iraq breathlessly reported in state media. Meanwhile hoardings in Tehran portray the Sepah as defenders of the nation.

One billboard that recently appeared in Tehran shows the firing of five missiles, in reference to the IRGC’s occasional and controversial testing of ballistic missiles, emblazoned with the words: “I am the Guardian of Iran.”

But – like the Pakistani and Chinese militaries – the IRGC also has a large stake in the Iranian economy, both in legal and illegal enterprises. Guard commanders own large swaths of real estate in Tehran, and are accused of involvement in lucrative cross-border smuggling operations.

“The IRGC’s domestic ascendancy is not unique, nor is its future trajectory immutable; in both respects, the IRGC can be profitably compared with the militaries of Pakistan and China,” said a recent report from the US Rand thinktank. “As its history has shown, the IRGC is subject to the same worldly pitfalls and evolutionary mutations that affect other bureaucracies – and this will only intensify as the IRGC delves deeper into profit-making financial activities. Indeed, from this observation, there is benefit in comparing the IRGC’s past and future with the evolution of the Pakistani military and Chinese People’s Liberation Army.”

Mohsen Sazegara was a founding member of Khomeni’s Sepah, but is now an exiled dissident – and an outspoken critic of the organisation he helped establish. “We created a people’s army to defend the country and also help in emergencies – but it turned into a monster,” he told the Guardian. “Its transformation during the Iran-Iraq war, then the creation of the Quds force, its involvement in financial activities and its role in suppressing reformists has turned it into a country inside a country, a government inside a government and an organisation that has no equivalent anywhere in the world. It’s like a river that is overflowing, covering everything.”