You are here: Home / MidEastGulf / Is Iran preparing for war? 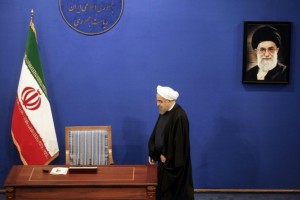 Iran was one of seven Muslim-majority nations included in Trump’s immigration ban executive orders, which have since been blocked by four federal judges after Muslim visa and green card holders were detained in airports across the country over the weekend. Iran has vowed to take “proportionate legal, consular and political action and … will take reciprocal measures in order to safeguard the rights of its citizens until the time of the removal of the insulting restrictions of the government of the United States against Iranian nationals.”

What exactly Iran’s U.N. resolution breach means for American-Iranian relations under President Donald Trump, however, remained unclear. Sunday’s reported launch was the second apparent ballistic missile test Iran has conducted since the resolution passed. It followed increased hostile relations between Iranian and U.S. vessels in the Strait of Hormuz, the disputed territory planted between the Persian Gulf and the Gulf of Oman. A U.S. navy destroyer fired warning shots at four Islamic Revolutionary Guard Corps ships after they began speeding toward the ship while failing to respond to American officials over radio communications Jan. 8.

Meanwhile, Iranian President Hassan Rouhani has consistently claimed the U.S. was simply targeting its current policy to cast the nation as a global threat while vowing to stay on course with its current nuclear efforts.

“(Trump) wants to do many things, but none of his actions would affect us,” Rouhani said in December. “By capitalizing on the dispute over Iran’s nuclear issue, they want to persuade others that the Islamic Republic establishes a threat against security and stability of its neighbors as well as Europe and the global peace.”