You are here: Home / Analysis / Is Iran behind the drone attack against Iraqi PM Al-Kadhimi? 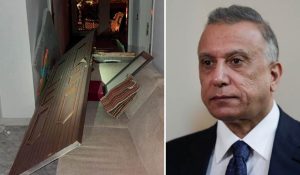 Reports on Sunday of a drone attack on the home of Iraqi Prime Minister Mustafa Al-Kadhimi represent a major escalation in the region, like reported by jopost.com.

It represents the increased use of unmanned aerial vehicles, primarily by Iranian-backed groups, to spread terror throughout the Middle East. It also represents the increased use of drones as a strategic weapon, in this case, with the goal of intimidating the Iraqi prime minister just days after security forces clashed with pro-Iranian protesters.

It’s likely that the attack was carried out by pro-Iranian militias as there are probably no other culprits in Iraq who have drones that could or would attack the Iraqi prime minister.

While ISIS has used drones in the past, it’s not clear why they would suddenly emerge now to target the Iraqi leader and that leaves Iran-backed groups firmly in the frame.

While official reports have not yet specified what group was behind the attack and no one has yet taken responsibility for it, the trend of such attacks in the region points to Iranian-linked groups.

In May, a drone was launched from Iraq, or possibly from Syria, targeting Israel during the 11-day war with Hamas. It is believed that Iran was also behind this attack.

For years, Iran has been building more sophisticated drones for surveillance and kamikaze-style attacks. The drones have become better at navigation and pre-programmed flight paths, or even real-time intelligence gathering. The fact they have targeted a moving ship is a clear indication of this.

An attack on the residence of Kadhimi is also a likely message by pro-Iran groups in Iraq that the prime minister is not immune.

Iraqi armed forces announced the start of investigations to discover the location of the launch of the booby-trapped drone that targeted Kadhimi, according to reports. Images showed the damage to the home, but it is unclear if drone fragments had been found that would link the design to any single country or entity.
One of the reasons pro-Iran groups — including Hezbollah, Hamas and the Houthis in Yemen — use drones, is that it is difficult to trace their launch site and to know who is behind them once they are launched.

Israel has, in the past, accused Iran of creating a drone training center. Drones from Iran and technology from Iran have been key to aiding Houthi efforts to attack Saudi Arabia.

But, the kind of drone used to attack the Iraqi premier may be smaller than some of the kamikaze drones, which tend to be larger than a human.
Locating parts of the equipment will be important, but Iraq’s security services may be reticent to conclude that Iran or any of its proxy groups were behind the attack.

Why? Because in previous incidents where Iraq’s prime minister has acted against pro-Iranian groups engaged in illegal attacks, they succeeded in freeing their jailed members as a result.

Now, the groups, most linked to the Fatah party in parliament and the paramilitary Hashd al-Shaabi, have been conducting a sit-in to demand the overturn of recent election results. This kind of election protest is designed to raise tensions and pressure the prime minister.

The problem that Iraq’s government is facing is that the militias are often tied to official paramilitary forces because former Iraqi prime minister, Haider Abadi, pushed to give the militias a legitimate role.

The militias were given increased power in 2014, based on some existing pro-Iran units, to fight ISIS but after the war on ISIS ended, the militias refused to go home and Abadi, who was backed by the US, empowered the militias.

They soon began taking over the border area of Albukamal in Syria, next to Iraq’s Al-Qaim, and funneling weapons from Iran to Hezbollah. They have been targeted by airstrikes, several of which were carried out by the US in retaliation for their attacks.