You are here: Home / Mediterranean / IS closes banks in Sirte; orders them to change to Sharia banking 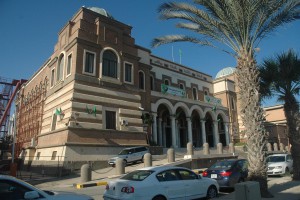 A source in Sirte has told the Libya Herald that the Islamic State (IS) forces in the town had not taken over and looted the Central Bank, as widely reported earlier.

What happened, according to the source, was that on Thursday, IS went to all banks in the town and closed them. They ordered all staff to turn up to the main mosque on Friday after evening prayer to repent for having being involved in dealing with interest (usury or riba) and ask for forgiveness.  Most went.

The banks must change to Islamic banking, IS has demanded. When they have made the change, they can re-open, the source said.

In any event, taking over the Central Bank in Sirte would be little more than a symbolic gesture. No money has been transferred to Sirte for many months. There is said to be almost no money held in the other banks either.