You are here: Home / Analysis / Irregular warfare in a new era of great-power competition 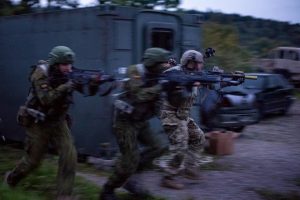 Rooted in Francis Fukuyama’s idea that the end of history was near, the end of the Cold War saw renewed enthusiasm for the liberal international order. That notion proved both illusory and short lived. By 2014, marked by China’s territorial aggression in the South China Sea and Russia’s annexation of Crimea, the reality of great-power competition in a multipolar world had returned to define how the world is ordered in fact, like reported by mwi.usma.edu.

First acknowledged in the 2015 US National Military Strategy, great-power competition became the conceptual framework upon which current US security and defense strategies are predicated. These strategies represent a departure from those that underpinned much of America’s post-9/11 wars—with their heavy components of irregular warfare—but that does not mean a departure from irregular warfare itself. Instead, this strategic emphasis on great-power competition is changing when, where, and how the United States conducts irregular warfare—counterterrorism, unconventional warfare, counterinsurgency, foreign internal defense, and stability operations. The changes most directly affect US special operations forces.

US Security and Great-Power Competition

The 2017 National Security Strategy responds to the growing political, economic, and military competition that the United States faces around the world. The 2018 National Defense Strategy flows from it, identifying great-power competition as the primary national-security concern. The NDS recognizes four major state-based threats. Long-term strategic competition with China and Russia are the principal priorities, followed by the rogue regimes of North Korea and Iran. In addition, it recognizes the importance of terrorist and transnational criminal threats. Together, these constitute the 4+1 framework of the NDS.

For cost and deniability reasons, and to avoid engaging their adversaries in conventional warfare, the great powers increasingly use proxies to compete for resources and influence. As existing conflicts in some countries expand, and as new countries become theaters of proxy warfare, the number of countries in the gray zone between war and peace will grow. This will largely be driven by China, which now pursues hegemony over dozens of countries worldwide.

The Expansion of Contested Geographies

In addition to the homeland, the National Defense Strategy identifies four regions of special concern: the Indo-Pacific, Europe, the Middle East, and the Western Hemisphere. In these regions especially, instability should grow as the great powers compete for resources and influence. The nature of the 4+1 threats individually drives where US special operations forces are most likely to be deployed as the new era unfolds.

China. China is in a period of economic and military ascendancy. Its all-of-nation strategy is focused on Indo-Pacific hegemony in the near term and displacing the United States as the leading global power in the long term. Primarily through arms sales and its trillion-dollar Belt and Road Initiative, China is moving aggressively to lock up natural resources and control global transportation routes. For now, the Belt and Road Initiative covers some two-thirds of the world’s population and involves three-quarters of the world’s known energy resources.

The primary regions where Chinese proxies are emergent are Asia, the South China Sea, the South Pacific, the Indian Ocean, Southeast Asia, the Middle East, and east and southern Africa. China is also targeting resource-rich and otherwise strategic geographies in the Western Hemisphere. These include Greenland to the north, and Argentina, Brazil, Chile, Costa Rica, Cuba, Panama, Peru, Bolivia, Uruguay, Venezuela, and Mexico to the south of the United States.

Russia. Russia’s focus is on periphery nations, shattering NATO and changing European and Middle East security and economic structures to its favor. The NDS cites Georgia, Crimea, and eastern Ukraine as places of particular concern, but Russia is increasingly engaged in many other countries. In the Middle East these include Syria, Egypt, Turkey, Saudi Arabia, Israel, Iraq, Iran, Lebanon, and Libya. In Latin America they include Cuba, Venezuela, Nicaragua, and Bolivia.

As the United States strengthens its hand in eastern Europe through the European Reassurance Initiative, considers an expanded footprint in Poland, and moves to end the Intermediate-Range Nuclear Forces Treaty, Russia will likely respond closer to the US homeland. It is already planning, for example, a military base on Venezuela’s La Orchila Island.

Iran. Iran is a rogue state that employs state-sponsored terrorism, a growing network of proxies, and a ballistic missile program. Its primary objective is to create a zone of influence in a Shiite Crescent stretching from the Mediterranean to the Arabian Sea. In addition to Iraq, the countries most directly affected are Yemen, Syria, Lebanon, and Israel. Other countries in the broader Persian Gulf, including US allies like Saudi Arabia, will be increasingly affected through the action of Iranian proxies.

North Korea. North Korea, the second rogue state identified in the NDS, is developing nuclear, biological, chemical, conventional, and unconventional weapons, and a growing ballistic missile capability. The countries most directly affected are South Korea, Japan, Russia, and China. However, with a missile reach that covers a far larger area than just Northeast Asia, North Korea has the growing potential to affect countries throughout the Pacific basin—including the United States.

Terrorist and Transnational Criminal Threats. The +1 priority of the NDS focuses on nonstate actors that threaten the United States, including terrorists, transnational criminal organizations, and others. A specific objective of the NDS is to degrade the ability of nonstate actors to acquire, proliferate, or use weapons of mass destruction. A second is to prevent terrorists from conducting operations against the United States or its allies.

The National Security Strategy explicitly identifies “the most dangerous terrorist threat” to the United States as jihadist terrorist organizations. Indicative of the scope of the threat, half of all active insurgencies in 2015 involved such organizations and most of those insurgencies had combat support from outside nonstate actors.

A November 2018 study from the Center for Strategic and International Studies (CSIS) found that the total number of active Salafi-jihadist fighters in the world was at “near-peak levels,” and almost three times higher than at 9/11. The diversity of jihadist groups has also grown. While ISIS and al-Qaeda have been the dominant focus of counterterrorism efforts since 9/11, two-thirds of the sixty-seven Salafi-jihadist groups worldwide are directly affiliated with neither organization.

The CSIS study identifies the Middle East, North Africa, south and central Asia, and sub-Saharan Africa as the regions with the most Salafi-jihadist fighters. Europe, east Asia and the Pacific have smaller numbers. The most fighters as of 2018 were in Syria, Afghanistan, Pakistan, Iraq, Nigeria, and Somalia. Others report significant jihadi activity in Yemen, Saudi Arabia, Algeria, Libya, Egypt, the Caucasus, Brazil, Mozambique, India, Bangladesh, Burma, Indonesia, Malaysia, the Philippines, Thailand, and many other locations. These include Australia, the United States, Canada, and western Europe.

Irregular warfare is the core mandate of US special operations forces, and SOF will be the most directly affected of all US forces by great-power competition. This applies especially to when, where, and how irregular warfare missions are engaged.

Since the 2014 drawdown of forces in Afghanistan, there has been a de facto demotion of two of the five forms of irregular warfare—counterinsurgency and stability operations. This is attested to by dissolution of the US Army Irregular Warfare Center (2014); the attempt to eliminate the Army’s Peacekeeping and Stability Operations Institute (2018); dissolution of most of the Center for Complex Operations (2018); and narrowing of DoD’s role in stability operations (2017–2018). All five forms of irregular warfare, however, will be affected by the strategic pivot to great-power competition.

Unconventional Warfare. Notwithstanding twenty-first-century successes like Afghanistan in late 2001 and Libya in 2011, unconventional warfare has been uncommon in recent years. In the last decade, SOF has focused on counterterrorism, counterinsurgency, foreign internal defense, and direct-action missions. Some argue that addressing today’s gray-zone conflicts will require greater use of unconventional warfare, and that SOF skills in this area have atrophied. This form of irregular warfare will likely resurge in the era of great-power competition, and could include supporting resistance forces in countries overrun by conventional enemy forces in locations such as eastern Europe.

Foreign Internal Defense. Strengthening the internal defense of allied countries has been a US security priority for decades. It involves a wide spectrum of US government agencies and associated organizations, and it has been a mainstay of US defense operations for special operations forces.

This mission will remain a high priority in the era of great-power competition. Demand for it will grow, as China, Russia, and Iran increasingly use proxies, more countries become unstable, and the gray zone expands. Limited public appetite for deeper US military engagement will fuel the demand for these kinds of operations, even as the number of operations could be constrained by budget and manpower limitations.

Insurgency is the most common form of warfare. There have been 181 insurgencies since the end of World War II, most of them resolved on the battlefield. The number of active insurgencies has been roughly stable since 9/11 at about thirty to forty a year, but they may grow in frequency if not intensity during the era of great-power competition as the use of proxies grows. SOF especially will remain heavily engaged in limited-scope counterinsurgency operations—in fact if not in name—even as full-spectrum counterinsurgency is eschewed.

Stability Operations. Among the five forms of irregular warfare, stability operations are unique. Some argue that stability today is a fundamental component of multi-domain operations. This includes proactive stability as well as counter-destabilization actions. Both state and nonstate enemies use destabilization strategies. Examples include Russia’s use of “little green men” in Ukraine, Iranian cyberwarfare in the Middle East, and rural insurgency by the FARC in Colombia.

The US military has engaged in several hundred stability operations since 1789. These include opening the American west, post–Civil War reconstruction, Germany and Japan after World War II, CORDS in Vietnam, and the ongoing wars in Colombia, Iraq, and Afghanistan. After 230 years, however, the Department of Defense 2018 directive on stabilization marks a sea change in US military policy. It designates the Department of State as the overall lead for stabilization, USAID as the lead for nonsecurity stabilization, and DoD as a supporting element charged with security and reinforcing civilian efforts.

In the era of great-power competition, instability should spread as the geographical scope of preconflict competition grows. Some say this argues for stronger US engagement in gray-zone stabilization campaigns. So long as US policy supports lower stabilization funding, however, the most likely scenario is less stability in more countries, and less sustainability of military gains in those theaters where stability needs go unfunded.

Fewer US resources will likely be allocated to longer-term stability operations because of US budget limitations, domestic funding needs, donor fatigue, and widespread public aversion to anything that walks, talks, or looks like “nation building.” Where the United States does engage in postkinetic stabilization, such as in Syria and Iraq, DoD will play a declining hands-on role as the scope and extent of direct intervention narrows. Stability will increasingly be funded by other donors. Those operations funded by the United States will be executed mostly through grants to host countries and international organizations like the World Bank, the regional development banks, and the United Nations.

Just as the US national-security and defense strategies refocus America’s strategic priorities on great-power competition, they also recognize the changing character of war. This is driven by technological advances in computing, big-data analytics, artificial intelligence, autonomy, robotics, directed energy, hypersonics, and biotechnology. These are tectonic shifts, and they will affect the ways and means by which war is conducted.

The risk of conventional warfare will grow in the new era as the strategic focus shifts to Russia, China, Iran, and North Korea. But execution of US strategy on the ground will continue to rely heavily on irregular warfare—counterterrorism, unconventional warfare, foreign internal defense, counterinsurgency, and stability operations. What will change for US special operations forces is when, where, and how irregular warfare is pursued.