You are here: Home / Africa / Irish special forces to withdraw from counter-terrorism operations in Mali 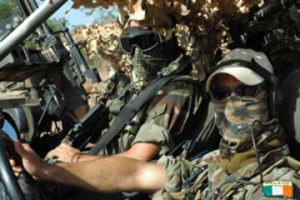 The Army Ranger Wing (ARW), the Defence Forces’s special forces unit, is to cease counter-terrorism operations in Mali this year, like reported by irishtimes.com.

The move would free up the elite soldiers for possible deployments to other parts of north Africa’s Sahel region, which has seen extensive instability and conflict in recent times.

It is understood that the resulting gap may be filled by conventional Irish Army troops, although no final decision has been made on this.

The ARW is in Mali as part of Minusma, a UN stabilisation mission in the African nation. It is widely considered the most dangerous of the Defence Forces’s overseas missions.

Up to 14 ARW members are deployed at any one time to Minusma headquarters in the capital Bamako and to the isolated Camp Castor in Gao, some 1,200km away. From there, they engage in long-range surveillance patrols in areas controlled by Islamic militants seeking to overthrow the Malian government.

The ARW operates as part of a large German intelligence, surveillance and reconnaissance company which provides the armoured vehicles they patrol in.

It is understood Defence Forces management consider the role carried out by the ARW, known as human intelligence (Humint), as not specifically a special forces competence and that it could be carried out by well-trained conventional troops.

This would free ARW troops up for more complex operations and it understood they may be deployed on another mission in the Sahel region in the medium term.

The Mali mission has been viewed as valuable from a training and experience point of view. However, it has also sometimes involved significant risks to troops.

Fourteen German and one Belgian peacekeeper were injured in a suicide bombing on their overnight camp by an al-Qaeda-linked terrorist group on June 25th last. Irish troops avoided injury as they were on patrol at the time.

It is understood the toll could have been much worse if the attacker had detonated the bomb closer to the camp’s fuel dump, which was believed to have been his intended target.

Three members of the ARW suffered minor injuries in February 2020 while on patrol in Gao. It is understood that their armoured vehicle struck a concealed explosive along the roadside.

The 13,000-strong French-led Minusma mission was established to help stabilise Mali following the Tuareg rebellion in 2012.

Irish involvement was first authorised by the Dáil in 2019 for a two-year period, which was later extended until this September.

More than 190 UN peacekeepers have died in the country, including nearly 120 killed by hostile action.

Another 20 Irish troops are currently deployed to Mali as part of the separate European Union Training Mission. These are non-combat troops responsible for training the Malian military in Koulikoro Training Camp 100km east of Bamako.

A spokesman for the Defence Forces said the ARW “currently contributes a field human intelligence team to Minusma as part of the German Intelligence Surveillance and Reconnaissance Task Force.

“Óglaigh na hÉireann is currently scoping the possibility of replacing the ARW with infantry soldiers from the Army, continuing the Defence Forces commitment to Minusma.”