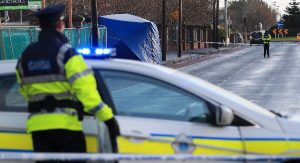 Technical examinations are being conducted on two mobile phones and at an abandoned house in a bid to determine the motivation behind a knife rampage by an Egyptian teenager in Dundalk that left a young Japanese man dead and two Irish men injured, like reported by irishexaminer.com.

Detectives, including specialist anti-terrorism officers, are trying to establish if there might be a jihadist motivation for the attack — which would be the first of its kind in the country.

Gardaí yesterday confirmed that a terror attack was a “line of inquiry”.

Sources stressed that there may be personal factors involved.

Detectives had to seek clearance from a doctor to interview the 18-year-old asylum seeker because he was in such a “highly agitated” state and was hitting himself.

There are reports that he was shouting in Dundalk Garda Station about some “dishonour” he had brought to his family, thought to be in Britain, possibly regarding some relationship issue.

The teenager was disarmed and arrested by uniformed, and unarmed, gardaí at 9.45am yesterday after a spree that began at 9am, when he knifed a Japanese man, aged 24, in the back.

The victim was walking on Avenue Rd on his way to work at the time.

It is thought that the suspect was staying in an abandoned house nearby and may have gone back into it after the attack.

Gardaí were alerted and arrived at the murder scene within seven minutes.

It is thought the suspect re-emerged from his house, possibly armed with a second knife and a wooden fence pole, and walked to Coes Rd, where, at 9.30am, he stabbed a local man.

Some 10 minutes later, on nearby Seatown Place, he assaulted another Irishman, aged 23, with the pole, inflicting head injuries.

The suspect was spotted by a uniformed garda and, after backup arrived, he was arrested at around 9.45am on Inner Relief Rd. It is understood he attempted to attack the gardaí with the pole, but they subdued him.

The Japanese man was pronounced dead at the scene.

Divisional officer, Chief Superintendent Christy Mangan yesterday said they had not yet established a motive and would not comment on the suspect’s “state of mind”.

He said the attacks appeared to be “random and unprovoked”.

He confirmed that terrorism was being investigated as a possible cause.

“A terror attack is a line of inquiry, it is certainly a line we would look at,” he said.

Specialist Garda sections from Crime and Security, including Counter Terrorism International and Security and Intelligence, are assisting gardaí in Dundalk.

CTI investigates jihadist terrorism and is part of the Special Detective Unit.

Security and Intelligence is the Garda’s intelligence-gathering arm and is the liaison section with international security services.

Security sources told the Irish Examiner that if international terrorism is established as a motive, it would represent the first jihadist attack in Ireland.

Ireland’s current international terrorism threat assessment is moderate (the second of five levels), which means an attack is possible, but not likely.

Gardaí yesterday began the process of examining two mobile phones that were taken off the suspect.

Sources said these phones could be “critical” in helping to establish possible motivation for the attack and that gardaí will examine online and text communications for any clues. It would also enable investigators to establish who he had been in contact with.

Gardaí are conducting a technical examination of the abandoned house for any clues. They will also try and talk to the suspect’s family. If they are in the UK, this would be done through British police.

One security source said it was “very difficult to legislate” for an attack that involved knives or poles.

Chief Supt Mangan said there was a “Garda interaction” with the suspect for the first time on New Year’s Day.

He said this was in relation to his immigration “status” and not an interaction that would indicate he was going to be involved in any criminality.

He said their information was that the youth had either applied for asylum or was about to do so.

He said there would be an international dimension to their inquiries to establish “where this person came from and how he got to this jurisdiction”.

It is understood that after local gardaí in Dundalk asked the youth for his Garda National Immigration Bureau card on New Year’s Day, he was sent to Hatch Hall accommodation in Dublin city centre.

He must have travelled back to Dundalk and gardaí are investigating why.