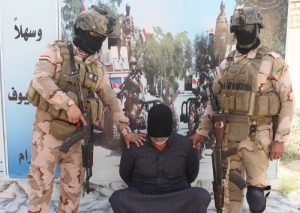 Military Intelligence announced on Wednesday that it had arrested six ISIS members in Nineveh and Kirkuk.

The Military Intelligence Directorate said in a statement six ISIS militants were arrested during a raid on their hideouts in the two Governorates.

It explained that the 16th and 20th Division of the Military Intelligence in Nineveh arrested five terrorists, and the 8th Division forces arrested another terrorist in Kirkuk.

The Directorate pointed out that “the detachments of the Military Intelligence Division in the Fifth Division, Diyala Operations Command, seized equipment in one of the ISIS hideouts, including mortar bombs, detonators, and other ammunition.”

In 2017, Iraq declared final victory over ISIS after Iraqi forces drove its last remnants from the country, three years after the militant group captured about a third of Iraq’s territory.

Yet, ISIS still has sleeper cells in several Iraqi Governorates.