Australian and New Zealand troops are training Iraqi soldiers for the big battle to oust IS from the city of Mosul. 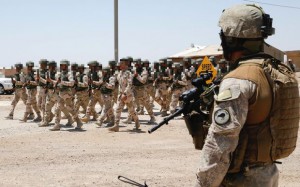 Of all the nasty, brutal battles of recent Middle East history, Mosul is expected to be the big one, an apocalyptic street fight spelling the end of the Islamic State group in Iraq.

This will be Iraq’s Stalingrad or Manila, for which the recent battle for the city of Ramadi gave a taste.

Fighters typically fought to the death. Much of the city was obliterated by airstrikes, including by Australian aircraft, and IS’s use of large IEDs to pancake apartment blocks.

US military spokesman Colonel Steve Warren said IS wouldn’t easily give up Mosul, one of the country’s largest cities and the organisation’s principal Iraqi possession.

“We believe they will fight tooth and nail to keep it,” he said.

“An assault on Mosul potentially … could turn out to be something akin to a last stand for them, at least in Iraq.” he said.

Mosul, a city of a million people in northern Iraq, fell to IS in June 2014.

It was not the Iraqi army’s finest moment. Hollowed out by corruption and the Baghdad government’s sectarian policies, many units disintegrated.

IS acquired a vast store of military equipment. Many of the city’s population fled and just how many remain as virtual prisoners isn’t known.

The Ramadi campaign that culminated in late December, was spearheaded by the elite Counter-Terrorism Service (CTS), advised by among others, Australian special forces, and assisted by abundant coalition air power.

Warren says the Mosul will be too large and too complex a fight for just the CTS. Regular army units will be heavily involved and for that they need to be trained.

Already 2400 have passed through the Australian and New Zealand training course at Taji, with 1200 now under training.

That includes 900 soldiers of the 71st Brigade and 300 of the Ninewa Operations Command Commando Battalion, actually a line battalion but one regarded as a cut above some other units because of its leadership, performance and discipline.

Many of its member are Sunni Muslims from Mosul, some with family still trapped in the city. For that reason members don’t want to be identified.

But they do plan to be at the forefront of liberating Mosul, raising their own unit flag plus the Australian flag as a gesture of appreciation for our assistance.

“It’s a big honour for me to do this task. We have more confidence. I can’t give you the exact date or time but I would say it is very soon,” an officer says through an interpreter.

Says another, “We are looking forward to going back to Mosul. The ISIS group is not only a threat to Iraq but to surrounding countries. It’s our job to defeat them because we think they are pure evil.”

A sergeant from the 71st Brigade says they can win.

“The soldiers think the Daesh are monsters. Every soldier here in camp Taji wants to go to Mosul to fight Daesh,” he says in accented English, using the local term for IS.

“We are training with Australian army and New Zealand army to teach us the fighting skills to go to Mosul.”

Urban warfare terrifies even seasoned troops and many of the Iraqi soldiers are far from hardened veterans. They include the young, some middle-aged and portly and a few who appear of pensionable age.

Following the 2003 US invasion, Saddam Hussein’s vast army was dissolved and as the country plummeted into insurgency then civil war, it was reconstituted at huge cost in treasure and toil. Australia contributed to that training but it was mostly done by the US.

Yet the Iraqi army hardly distinguished itself as IS invaded in 2013 and 2014. Units broke and ran, with leaderless troops rounded up and summarily murdered.

It seemed Baghdad was threatened, although that was never really likely.

Under the Building Partner Capacity mission, Australia, New Zealand and several other nations agreed to deploy teams to train Iraqi army units to a standard where they can retake their country.

That’s done at the Taji army base, a short distance north of Baghdad, a vast untidy military area that features ranges, barracks and huge piles of building rubble, large numbers of old military vehicles plus rubbish.

He said ultimately the team’s best result was to turn out soldiers competent at basic military skills and confident in those skills.

Training starts with the basics. Directly below the portrait of Malcolm Turnbull On Keating’s office wall is a placard which reads: “Helping the IA (Iraqi Army) defeat Daesh one M16 sight adjustment at a time.”

Getting a rifle to shoot where it’s supposed to is soldiering 101 but far from universal in the Iraqi army.

The standard of marksman, a skill usually taught in basic training, isn’t always high. In a morning of instruction, many display marked improvement.

Training then goes on to more advanced skills such as house clearance. There’s a strong emphasis on detecting and clearing the IEDs they will encounter.

The senior New Zealand officer in the taskforce, who can’t be identified under New Zealand policy, says this was all about the Iraqis.

“It’s not about us trying to impose our standards, our rules, how we would do business back in Australia or New Zealand,” he said.

“It doesn’t happen overnight but they know and we know they are going out to the battlefield very very soon and anything we can do to make them survive for a minute, an hour a day longer and achieve the opposite effect on Daesh is a bonus.”