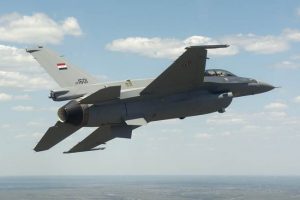 The Iraqi Defense Ministry announced late Monday that 16 Islamic State militants were killed in an airstrike in the northern province of Salahuddin, like reported by iraqinews.com.

“The Iraqi Air Force carried out a successful airstrike on Tuz Khurmatu district in northern Salahuddin, leaving 16 IS terrorists killed,” the ministry said in a statement.

The statement added that the militants “were hiding inside a building near Tal Farhan in central Tuz Khurmatu” when the airstrike was staged.

“The terrorists sneaked into Tuz Khurmatu district from nearby mountains to carry out terrorist attacks against security apparatuses,” the statement concluded.

Iraq declared the collapse of Islamic State’s territorial influence last November with the recapture of Rawa, a city on Anbar’s western borders with Syria, which was the group’s last bastion in Iraq.

Despite the group’s crushing defeat at its main havens across Iraq, Islamic State continues to launch sporadic attacks against troops with security reports warning that the militant group still poses a threat against stability in the country.