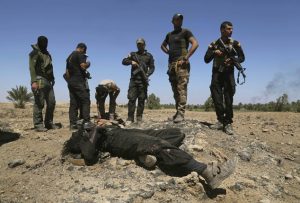 Fifteen Islamic State militants were killed during a security campaign on the Iraqi-Syrian border, a police spokesman said according to iraqinews.com.

“The security operation was launched after tracking down the Islamic State cell for a few days,” he said, adding that the troops seized medium arms and explosive belts.

Iraq declared the collapse of Islamic State’s territorial influence in Iraq earlier in November with the recapture of Rawa, a city on Anbar’s western borders with Syria, which was the group’s last bastion in Iraq.

IS declared a self-styled “caliphate” in a third of Iraq and neighboring Syria in 2014. A government campaign, backed by paramilitary troops and a U.S.-led international coalition, was launched in 2016 to retake IS-held regions, managing to retake all havens, most notably the city of Mosul.