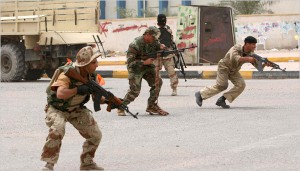 The Baiji area has seen almost uninterrupted fighting since IS swept across Iraq last year, but top officers said Thursday that the Baiji refinery, the country’s largest, was almost secure.

There were contradictory statements from the armed forces and the allied paramilitary Popular Mobilisation (Hashed al-Shaabi) on whether or not the refinery had been fully retaken.

Senior commanders said it had been “completely cleared” but the Joint Operations Command said late Wednesday that the sprawling complex had not yet been extensively swept by Iraqi forces.

The refinery itself, which once produced 300,000 barrels per day of refined products — meeting half of Iraq’s needs, is said to have been damaged beyond repair and no longer of huge strategic interest.

The larger Baiji area, however, is at a crossroads between several key frontlines and officers said anti-IS forces were pushing north past the refinery to further cut IS supply lines.

“We managed to cut off supply routes and Daesh’s ability to communicate between the areas of Tikrit, Sharqat and Anbar,” said a senior officer from Salaheddin province, using an Arab acronym for IS.

Hadi al-Ameri and several other top commanders from the Hashed al-Shaabi, an umbrella organisation dominated by Tehran-backed Shiite militia groups, were supervising operations in the area.

Qassem Soleimani, the commander of the foreign wing of Iran’s elite Revolutionary Guards, was reported in Iraqi media to have been the mastermind of the latest Baiji offensive.

Key positions in the Baiji area, around 200 kilometres (120 miles) north of Baghdad, have changed hands several times since IS launched a massive offensive in Iraq in June 2014.

Top army officers said control of Baiji is essential to ensuring the success of operations against IS in most of its remaining strongholds.

Among them is Ramadi, where Iraqi security forces backed by Sunni tribal fighters and US-led coalition air strikes have said they are poised to launch a much-delayed assault.

The government had resisted for more than a year in the capital of the western Anbar province until IS forces blitzed them out with dozens of massive suicide truck bombs in mid-May.

After what was Baghdad’s most stinging setback this year in the war against IS, Prime Minister Haider al-Abadi and Hashed leaders vowed to retake Ramadi within days.

But the jihadists’ sophisticated network of defences using explosives and searing summer temperatures thwarted plans for an immediate fightback.

The US-led coalition said on Tuesday that additional training on urban warfare had since been provided to Iraqi troops, who were now ready to launch an offensive.

“We now believe that battlefield conditions are set for the ISF (Iraqi security forces) to push into the city,” said spokesman Colonel Steve Warren, estimating between 600 and 1,000 the number of IS fighters remaining in Ramadi.

The jihadists’ weapon of choice is the explosives-laden vehicle launched against enemy targets by a suicide driver, a tactic IS used on an unprecedented scale in Ramadi in May.

North of Baiji, federal and Hashed forces reached their northernmost positions since Baghdad launched a counter-offensive against IS last year.

Fighters were focused Thursday on the town of Makhoul and working their way up the main road to approach IS-held Sharqat and further isolate Hawijah, to the east.

The Kurdish peshmerga forces have been pushing south from Kirkuk in recent weeks to pile pressure on the Hawijah area.