You are here: Home / MidEastGulf / Iraqi troops are entering in Mosul 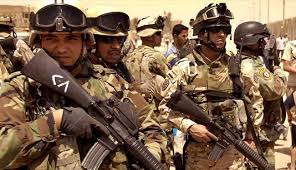 Iraqi senior officers responsible for the liberation of Nineveh assured today that ”in a few hours” they will begin advancing towards the center of Mosul, where terrorists of the Islamic State are preparing a strong resistance.
According to Lt. Gen. Abdel Wahhab Al-Saedi, the Army and the Counter-Terrorist Service of Iraq are ‘very close’ to entering the heart of the city.

With the support of Sunni tribal militias, Shiite volunteers from the Popular Mobilization and Peshmerga Kurdish fighters, loyalists and the international coalition led by the United States, are ready to approach Mosul from its east, north and south flanks.

Other sources estimated that the operations, which began on October 17th after an order from the commander in chief and Prime Minister Haider al-Abadi, are progressing faster than expected after two weeks.

On Monday, the leader of Iraq’s Saraya al-Khorasani brigades, Ali al-Yaseri, announced that counterterrorist units had entered and deployed in the suburbs of Mosul, the last stronghold of the extremists of Daesh, Arabic acronym for ISIS, in Iraq.

On the other hand, the central command of the elite counter-terorist service said it was awaiting the advance of other units to undertake the first assault in Mosul, after Al-Abadi said that the Daesh was surrounded and its men ‘can only die or surrender.’

From early Tuesday, the counte-terroris troops were fighting in Gogjali, a village located on the eastern edge of Mosul, which they had arrived in on Monday, but preferred to wait for the progress of other units to conduct a concerted and simultaneous strike.

Although they omitted information on when will the next step will take place, the heads of the counter-terrorist Regiment in Mosul said that the next targets will be the towns of Al-Zahra and Al-Karama, on the east side of the city, and described the operations as ‘a matter of pride.’

This regiment was the last contingent to flee Mosul when ISIS took the city on June 10th, 2014.

The government forces, supported from the air by the US-led coalition moved through the village of Bazwaya, east of Gogjali, and found out that many terrorists had fled, with some trying to blend in with displaced civilians.

Prime Minister Al-Abadi appeared on state television last night dressed in military fatigues, and warned the jihadists that ‘we will come from everywhere. They have no way out, no escape, they can only die or surrender.’

In the mean time, Shiite militiamen of the Hashed al-Shaabi (‘Popular Mobilization’ in Arabic) advanced from the north to attemp to cut supply lines and escape routes westward to extremists on the border with Syria.