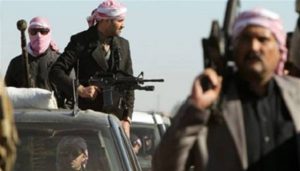 A local tribe in Iraq has urged Iraqi authorities to form a special brigade from its members to take revenge on Islamic State militants, who killed six of its tribesmen after kidnapping them in the Jazirah plain, according to iraqinews.com.

In a message to Prime Minister Haider Al-Abadi on Wednesday, the Shammar tribe, one of Iraq’s largest Arab tribes with more than 1.5 million members, held Iraqi security forces “accountable for the protection of Iraqi civilians against Islamic State threats”.

It called on Abadi to open the door for a new batch of the tribe’s volunteers to join the Iraqi army to stand up to recurrent attacks of Islamic State in the Jazirah plain, where a host of Arab tribes are residing.

The tribe further reiterated its unshakable stance to “stand in the face of injustice and defend the oppressed people, at any cost.”

A group of Islamic State militants executed on Monday six people, including two pro-government fighters, a few hours after kidnapping them.

The bodies of the six people were found at a desert area a few hours after the kidnapping, he noted, adding that the victims were found shackled and shot in their heads and backs, meaning that they were executed by the IS militants.