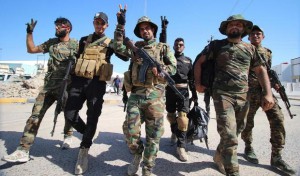 “We are ready to ally with the devil if this would mean getting rid of Daesh (the Arabic synonym of Islamic State),” said Mohammed, an Iraqi Sunni Muslim commander who is fighting IS in Anbar alongside Kataib Hezbollah, a prominent Shia militia.

Mohammed, who declined to use his full name for sensitivity, spoke to Middle East Eye as he was following the paper work of his fighters with the Iraqi federal authorities in Baghdad.

“Sunni figures who are playing the sectarian card and insist on refusing to cooperate with what they call the Shia militias, currently are living in Arbil, Dubai and Amman hotels, while our children and our women have been dying every day in tents set up for them in the desert,” he said bitterly, adding: “Let them bring their families to live with our families in the tents and then we will talk.”

Like Mohammed, thousands of Sunni Muslim tribesmen have joined the Shia armed factions which are fighting militant Islamists in the Sunni areas to get the required moral and logistical support to liberate their areas.

A third of the Iraqi territories in the Sunni-dominated north and western parts of the country fell into the hands of IS’s militants last summer after the dramatic collapse of the Iraqi army.

Since then, Shia militias including Badr Organisation, Asaib Ahl al-Haq and Kataib Hezbollah-Iraq have been representing the backbone of the Popular Mobilisation force which was formed by the Iraqi government last June as the governmental umbrella for the armed factions which are fighting IS.

The Popular Mobilisation consists of prominent Shia militias in addition to all the new Shiiite and multi-sectarian armed formations.

Many new Sunni battalions, each one consists of 250-600 fighter, have been formed in the Sunni areas in Diyala province east of Baghdad, the Sunni-dominated province of Anbar and Salahudeen province, the home town of the former Iraqi president, Saddam Hussein.

“From the beginning we thought there was no way to liberate our lands, but by getting the help of Iraqis, not relying on the United States nor any other countries, so we joined the Popular Mobilisation,” Khalid Abdullah, the commander of Asaib Ahl al-Haq Sunni Battalion in Salahudeen told MEE by phone.

“Early this year, we joined Asaib Ahl al-Haq and since then we have been fighting, shoulder by shoulder to liberate our areas … they unconditionally armed, equipped and trained my 600 fighters,” Abdullah said.

Merging the small, new armed groups, regardless of their affiliations, with a prominent Shia militia such as Badr, Asaib or Kataib gives their fighters access to medium and light weapons and equipment without being subject to the slow and routine procedures which are adopted by the Iraqi Ministry of Defence, Sunni commanders said.

The key Shia militias have been enjoying the support of the great regional power of Iran, which has been arming, equipping and funding some of these militias for years. Military arsenals controlled by the Shia paramilitary groups are much more sophisticated than those owned by the Iraqi government, security officials said.

“What I am interested in is getting the weapons and equipment which would take me to the battlefields.

Badr, Asaib and Kataib would supply it in days after you join them, while the government has nothing to offer for me or anyone else because of the shortage (of weapons and ammunition) and the corruption,” a Sunni commander in Tikrit said on condition of anonymity.

“It’s not obligatory (merging with a prominent Shia militia) but being alone without their back-up means getting nothing. No weapons, no equipment and no political future,” the Sunni commander said.

The Iraqi Shia-led government has been struggling since last year to combat the militant organisation which declared an Islamic caliphate stretching across the Syrian and Iraqi territories and still controls the Iraqi city of Mosul, most of the towns and cities of Anbar and large parts of Salahudeen and Kirkuk provinces.

The US-led international military coalition has been striking sites and the headquarters of IS in both Iraq and Syria since last August but participation of Sunnis in the liberation battles of their areas is vital for Baghdad to get more international support to fight IS.

“We believe that these (Sunni) areas have to be governed by its people, so we are not interested to make any demographic changes or drive Sunnis away from their areas,” Taha Diraa, a leader of the National Alliance, the biggest Shia political bloc told MEE.

“All what we are interested in now is building a mutual trust with them (Sunnis) which would produce, in the long term, a national project,” Diraa said.

Analysts said polarising the Sunni fighters and convincing them to join one of the Shia armed factions is a long-term goal to change the Sunni political map, and establishing moderate armed Sunni factions linked to Shias to counter the extremist Sunni armed groups in the Sunni areas.

“Offering unconditional armed support for the Sunni tribesmen under the umbrella of the Popular Mobilisation and linking them to specific Shia leaders is aiming to create a new Sunni political bloc which would be loyal to the Shia blocs in the future and being a friend of Iran which is indirectly the provider of that support,” Abduwahid Touma, an independent political analyst, said.

“The other goal is changing the balance of power of the Sunni armed forces in these areas by establishing groups linked to the Shia armed factions. These groups will be prepared to combat the Islamic Sunni organisations including the radical Salafists, the Islamic brothers and Ba’ath Party,” Tuama, said.