You are here: Home / MidEastGulf / Iraqi Special Forces near Mosul from the east in a dawn assault 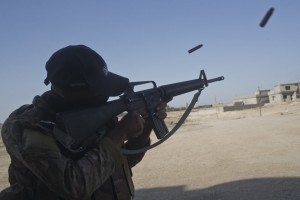 Iraqi special forces advanced on the ISIS-held city of Mosul from the east on Monday, taking heavy fire but inching closer to the city’s limits.

Car bombers are trying to stop the advance, but the troops, just two miles (three kilometers) from Mosul’s eastern outskirts, aim to enter it later in the day, Brig. Gen. Haider Fadhil said.

For two weeks, Iraqi forces and their Kurdish allies, Sunni tribesmen and Shiite militias have been converging on Mosul from all directions to drive ISIS from Iraq’s second largest city. The operation is expected to take weeks, if not months.

Since the offensive began on Oct. 17, Iraqi forces moving toward the city have made uneven progress. Advances have been slower in the south, with government forces there still 20 miles (35 kilometers) from the city.

A day earlier, thousands of fighters flocked to join Iraq’s state-sanctioned, Iran-backed Shiite militias who are to cut off Mosul from the west. In a series of apparent retaliation attacks, suicide bombers on Sunday struck in Baghdad’s mostly Shiite neighborhoods, killing at least 17 people.

The deadliest of the bombings, a parked car bomb, hit a popular fruit and vegetable market near a school in the northwestern Hurriyah area, killing at least 10 and wounding 34. On Monday, ISIS issued a statement claiming responsibility for the attack.