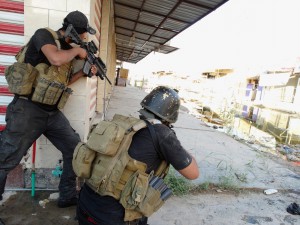 Anti-terrorism device announced entering the city of Ramadi, one of the elements of the strongholds of ISIS organization west of the capital Baghdad.

The Iraqi military aviation has delivered yesterday leaflets on the city where the population were advised to leave within 72 hours for their own safety.

Iraqi forces announced last week that they had made progress on two fronts in Ramadi , and expelled ISIS from important military base and al-Taameem neighborhood western city.

According to the Iraqi authority’s intelligence estimates, there are about 300 ISIS elements in Ramadi.

According to a brief statement to counter-terrorism received Shafaq News, that they enter Ramadi city, the center of several dialogue and start clearing neighborhoods there.