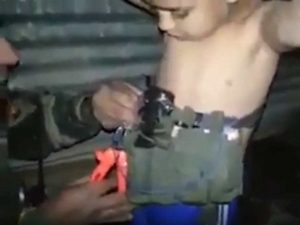 A video showing a soldier removing a suicide belt from a terrified seven-year-old boy has emerged and it’s incredibly moving, like reported by abna24.com.

The video which has been released by the Iraqi army shows a courageous soldier in Mosul, Syria, ordering a frightened child to raise his arms while he disarms the lethal bomb.

The moving footage shows the soldier taking off the shaken boy’s t-shirt and asking him to hold still, while he tackles the suicide belt.

After advising the boy to ‘keep your arms up son’ the soldier unravels a bandage which is wrapped around the little boy’s waist, to reveal the set of explosives strapped to his torso.

The boy who is clearly terrified, exclaims ‘no, no uncle,’ as the soldier reveals the detonator attached to the child’s body.

Remaining calm and focused in a fraught situation, the soldier tries to calm the stricken boy down.

Don’t worry son. I will not harm you.

He then clips the wire, safely disarming the bomb before it could kill the young boy and potentially many others.

ISIS strapped explosives around this little boys (7) waist. Iraqi soldiers disarmed him after he fled from Mosul.

The clip ends with the soldier unfastening the remainder of the boy’s belt and gingerly laying it on the ground away from the affected child.

It is thought the boy was found with a group of refugees, standing alone and clutching his stomach in fright.

An incredible act of bravery from the Iraqi army’s part and thank god they got to the boy in time.