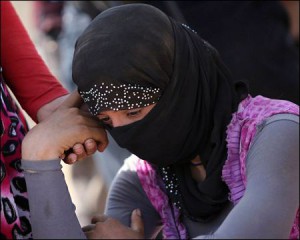 A new Iraqi feature film portrays the ordeal of a young Yazidi woman kidnapped by Islamic State (IS) militants.

Taken from her home in northern Iraq after her town is captured, a woman named Jwan, which is the name of the film, suffers brutal attacks and enslavement at the hands of her captors.

Hundreds of Kurdish Yazidis were killed and thousands captured and enslaved by IS militants, who overran the northern city of Mosul in June 2014 and a proclaimed Islamic caliphate spanning Iraq and Syria.

Yazidi women and girls were captured, raped and tortured, and forced to convert to Islam and marry Islamic State followers, according to rights groups.

The 30-minute feature was filmed in the southern Iraqi city of Basra over a 10-day period in the summer of 2015.

The film’s director and producer, Ali Al-Jaberi, said that he hopes to shed light on the suffering experienced by ethnic minorities in Iraq.

“I consider it a tale to the wounds we suffer as Iraqis, these wounds from the abuse of the terrorist gangs of IS on innocent people and especially the women, the film is dedicated to all of our sisters that are still in captivity, have been freed or have been martyred, from all sects, our Yazidi, Turkmen and Kurdish sisters. God willing, we hope to deliver our message and condemn these crimes,” Jaberi said.

The film’s location of Basra was chosen as it features hills and landscape that is similar to areas under IS control in the northern and western parts of the country.

Assistant Director Muther Salman explained that Jwan is based on true ordeals that many Yazidi women have suffered, which may be difficult to for some viewers to watch.

“Jwan is an Iraqi girl that has been displaced from her home by force and her family have been killed because of IS crimes, which we will see in this film which tells a real life story. It will be hard for the audience to watch, it happened to thousands of Yazidi women and is still happening to other Iraqis in the north, it was hard for us to show all of this but we had to show the world what Islamic State is, and what their crimes are, that were delivered in the name of Islam and the fake religion that they represent,” he said.

Director Jaberi self-financed the film, working on a small budget of around $30,000 U.S. dollars, with the actors working for free.

Actor Hasan Hnatoosh plays an IS military leader in the film and carried out extensive research on the way his character should dress and behave.

“As an artist, I consider my participation in this film as a starting point because it was real cinematic work, as far as filming, direction and the scenes, my role in the film was of a military leader of the terrorist group of IS, I was preparing and studying for the character for seven months continuously, I looked at many of their internet websites, I watched real videos from the IS organization, because I had to study the character and the way they look, the hair and the beard,” Hnatoosh said.

The Yazidis, thought to number several hundred thousand in Iraq before they came under attack by Islamic State, are mostly Kurdish speakers whose ancient religion has elements of Zoroastrianism, Christianity and Islam.

Islamic State militants say they are devil worshippers, an accusation Yazidis reject, and must convert to Islam or die.

IS say enslaving Yazidi is the revival of an ancient custom of using women and children as spoils of war.

Islamic State group (IS) has extended its control on most parts of Sinjar (Shingal) district in northwest Iraq on August 3, 2014 which led thousands of Kurdish families to flee to Mount Sinjar, where they were trapped in it and suffered from significant lack of water and food, killing and abduction of thousands of Yazidis as well as rape and captivity of thousands of women.

Those who stay behind are subjected to brutal, genocidal acts: thousands killed, hundreds buried alive, and countless acts of rape, kidnapping and enslavement are perpetuated against Yazidi women. To add insult to injury, IS fighters ransack and destroy ancient Yazidi holy sites.

According to Human Rights organizations, thousands of Yazidi Kurdish women and girls have been forced to marry or been sold into sexual slavery by the IS jihadists.

The United Nations has described the attack on the Yazidis as a possible genocide.

Of around 5,000 Yazidi men and women captured by the militants in the summer of 2014, some 2,000 have managed to escape or been smuggled out of Islamic State’s self-proclaimed caliphate, activists say. The rest remain in captivity.

There are almost 1.5 million Yazidis worldwide.