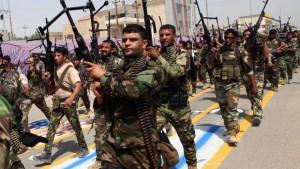 Iraq’s most powerful Shi’ite force said it is relying more heavily on elite units who fought in Syria in the battle against Islamic State for control of a critical Iraqi refinery and is now well placed to counter the militant’s guerilla warfare.

Iraq’s biggest refinery complex near the town of Baiji north of Baghdad has changed hands several times over many months of fighting and is one of the main fronts in Iraq’s bid to retake the third of its territory held by the Sunni insurgents.

Haji Jawad al-Talabawi, a military commander and spokesman for the Asaib Ahl al-Haq militia, said it is now more effective in street combat and he is hopeful that the tide will turn in favor of government troops and their Shi’ite militia allies.

“We are using our special forces who were trained fighting in Syria (against Islamic State). That has enabled us to fight street-to-street and house-to-house,” he told Reuters in a telephone interview. “We are depending on a new strategy.”

“We will defeat Daesh in Baiji soon, in a matter of days.” Daesh is a mildly perjorative Arabic acronym for Islamic State, also known in English as ISIS or ISIL.

Iraqi army and police commanders leading the battle for control of the Baiji refinery told Reuters this week they cannot defeat Islamic State unless they change tactics to better cope with the insurgents’ guerrilla tactics.

The fighters responded with their own major victory last month, seizing the city of Ramadi in Sunni heartland Anbar Province in the west.

The battle for Baiji, about 40 km (25 miles) north of Tikrit, is an important test of whether the government and Shi’ite forces can reclaim momentum. But they have so far failed to secure victory there against a mobile and hidden enemy that has proven expert in unconventional warfare.

Talabawi said militias now control 80 percent of Baiji – a claim that could not be independently confirmed. Islamic State is resorting to what he called its “last card” in Baiji.

“They have mostly foreign fighters from countries like Afghanistan and Pakistan and Saudi Arabia. They have suicide bombers in place,” said Talabawi.

Asked how Asaib Ahl al-Haq and its allies would avoid a repeat of the past, when their control of Baiji slipped, he said: “We are cooperating with a local volunteer force of 400 people who will help keep it under control.”

“We found 450 bombs in the past two weeks,” Talabawi said.