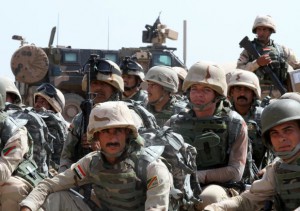 A source in Nineveh Operations Command announced on Sunday, that the Iraqi Army forces had foiled ISIS attack on the outskirts of a village south of Mosul.

The source said in a statement received by IraqiNews.com, “A force from the army’s 15th brigade repulsed ISIS attack on the outskirts of al-Nasser village in Makhmur District, and killed 10 ISIS militants.”

The source, who requested anonymity, added, “coalition aircraft also bombed a booby-trapped vehicle during the attack and killed its occupants.”