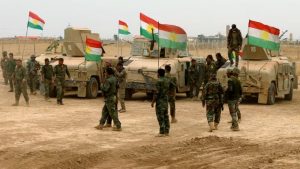 In an interview, Shwan Shamerani clarified that there was no timeline for when the Peshmerga could return to the disputed areas, a belt of territory claimed by both Baghdad and Erbil.

ISIS exploits the security vacuum there to conduct attacks against civilian and military targets.

The new units will focus on Kirkuk governorate and will be responsible for Shwan, Pirde, Qara Hanjir, Sargaran, Dubz, Laylan, Daquq, and northern Khurmatu, he said.

A joint delegation from the KRG and Iraq’s federal government recently visited Kirkuk for an inspection tour.

Shamerani added that bases for the joint forces were being constructed in the disputed areas.