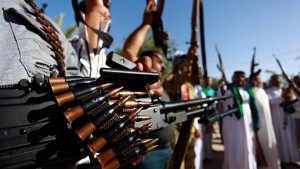 Vice President of the Iraqi Parliament, Aram Sheikh Mohammed called North Atlantic Treaty Organization (NATO) to provide more support and assistance to the security forces from the army, police and Peshmerga in the war being waged against ISIS terrorist organization.

According to a statement issued by Sheikh Mohammed’s office ” for the second day in a row and within the events and activities of the International Conference of NATO, which is currently held in Budapest, the capital of Hungary, Vice President of the Iraqi Parliament, Aram Sheikh delivered Iraq’s speech amid a high-level international presence asking NATO more assistance for Iraq and Kurdistan Region in the war against ISIS terrorist groups “

According to the statement, Sheikh Mohammed “highlighted the situation in Iraq and the security and political events in addition to the national reconciliation issue and passing a number of important laws in the parliament “.

The Deputy of Parliament’s Speaker noted to “the deterioration of the situation in the Middle East and its impact on the security issues in the region in general, as NATO called for more efforts to prevent the outbreak of crisis”.