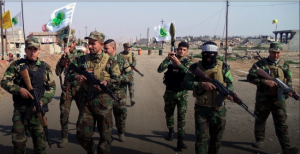 The pro-government paramilitary troops have announced shelling, through its artillery, Islamic State militants inside Syria, like reported by iraqinews.com.

The targeted militants, according to the statement, “were trying to reach to the troops deployed along the borders, taking advantage of the bad weather conditions.”

The Iraqi-Syrian borders are under the control of joint troops of military and border guards.

In December, Abadi announced full liberation of Iraqi lands, declaring end of war against IS members. However, Islamic State continues to launch sporadic attacks across Iraq against troops. Security reports indicate that the militant group still poses threat against stability in the country.

Thousands of IS militants as well as Iraqi civilians were killed since the government campaign, backed by paramilitary troops and the coalition was launched in October 2016 to fight the militant group, which declared a self-styled “caliphate” from Mosul in June 2014.