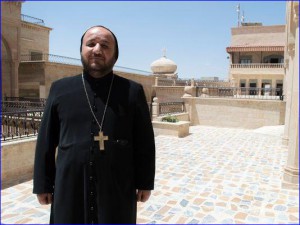 Islamic State – or ISIL, is known for its brutality. The terrorist group not only demolishes human lives, but also historical treasures. Most recently ISIL blew up an ancient temple in Syria’s Palmyra ruins. Despite this, members of one monastery in Iraq are refusing to bow down and abandon their territory.

On the outskirts of Erbil, on the hills of Mount Alfaf lies the ancient Mar Mattai Monastery. Built in the 4th century, it is the oldest in Iraq. Located only miles from ISIL territory – it’s currently under risk of an attack. Yet three monks and six students refuse to abandon this historic site. The sound of prayer echoes in the magnificent hallway – almost like an uproar of defiance against ISIL – as mass continues as usual. Members of the monastery are willing to risk their lives in order to protect the ancient manuscripts tucked away in cave-like chambers.

“That’s what we are afraid from, what you see from ISIS, they destroy they explode every value thing, so we were so worried if they would do the same thing for our monastery…” said Yousif Ibrahim, Christian monk.

As a man of God – Yousif Ibrahim encourages people to confront ISIL.

18-year-old Hadeer Ghassan, was forced to flee her home. She is one of the students trapped inside the monastery. Her words are a cry of despair …

“Actually I care about the future and my only goal and dream is a very small thing- to serve my country by becoming a teacher. But ISIS destroyed my dream. The only thing I need from the world is to come and save us from these criminals,” student Hadeer Ghassan said.

Though they are fearful of ISIL, it seems members of this monastery are determined to stay, keeping faith in God – and trusting their lives with the handful of Kurdish Peshmerga fighters currently guarding the monastery from a potential ISIL attack.