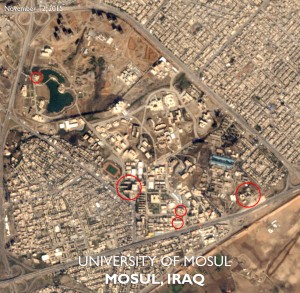 Iraqi elite forces stormed a key university in the northern city of Mosul on Friday as part of a US-backed campaign aimed at dislodging Daesh from its last urban stronghold in Iraq, a senior army officer said to albawaba.com.

“The terrorism-combat service [took control of] the Freedom Bridge and raised the Iraqi flag on it. The forces also stormed Mosul University and [took control of] several buildings,” said Abdul Amir Rasheed, the commander of the government campaign in Mosul.

The troops “liberated” the district of al-Sadria in the eastern section of Mosul where the university is located, Rasheed said in a statement without giving casualty figures.

Daesh militants used the university compound as their headquarters in the area, Iraqi media reported.

The advance brings government troops closer to the Tigris River that runs in the centre of Mosul.

Iraqi forces, backed by US-led air power, are pressing ahead with the campaign launched in October to retake Mosul, Iraq’s second-largest city, which has been under Daesh control since mid-2014.